Princeton University turned 270 years old this year. This Ivy League institution needs no introduction. It has been associated with 42 Nobel laureates, two U.S. Presidents, and twelve U.S. Supreme Court Justices, among so many others. 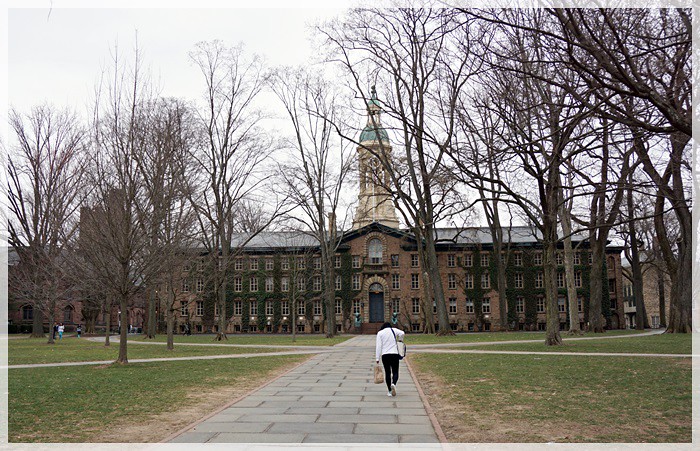 That’s the Nassau Hall. It’s the largest stone building in the American Colonies, built in 1756. It’s the first building you’ll see when entering the campus from Nassau street. It’s currently the meeting place of the faculty and the Board of Trustees.

My sister lives with her husband roughly 32 kilometers from the Princeton University campus so when Masood and I visited them earlier this year—in March, more specifically … has it been seven months already?—her husband, Khurram, took us to visit the place. He planned for us to leave at 10 am but, considering that there were three ladies in the group (Khurram’s sister, Madiha, my mom, and I), we left the house at 3 pm. Or was it 4?

In retrospect, I truly wished we had listened to him and left earlier during the day. There was so much to see and, given that spring had not officially begun yet, the days were short, wet and cold.

Across the street from Nassau Hall, a popular Princeton landmark known as Lower Pyne Building sits grandly at the intersection of Nassau and Witherspoon Streets. The edifice dates from 1896, when it first opened as a Princeton dormitory.  It is modeled on Tudor-style English houses with its steeply pitched roof, cross gables, and massive chimneys. 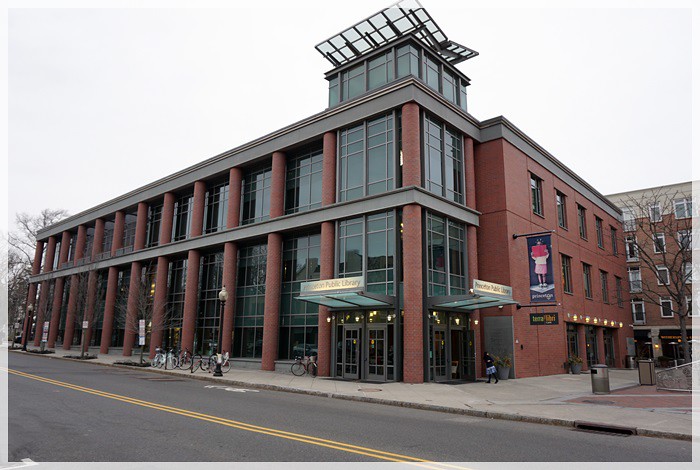 This state-of-the-art library opened at 65 Witherspoon Street in April 2004. The large glass “porch” and a playful glass staircase (sorry, not visible in the photo) create a lively “see and be seen” theatricality along the main Princeton street. Children have their special place on the third floor, which includes a tower room, story center and their own special outdoor garden terrace!

This is the University’s third oldest building, built in 1803. It has been recently renovated – the sandstone exterior walls are left intact, but the inside was completely gutted. The arched windows are restored, with the original glass retained wherever possible to allow an abundance of natural light in the building.

“Oval with Points” by Henry Moore 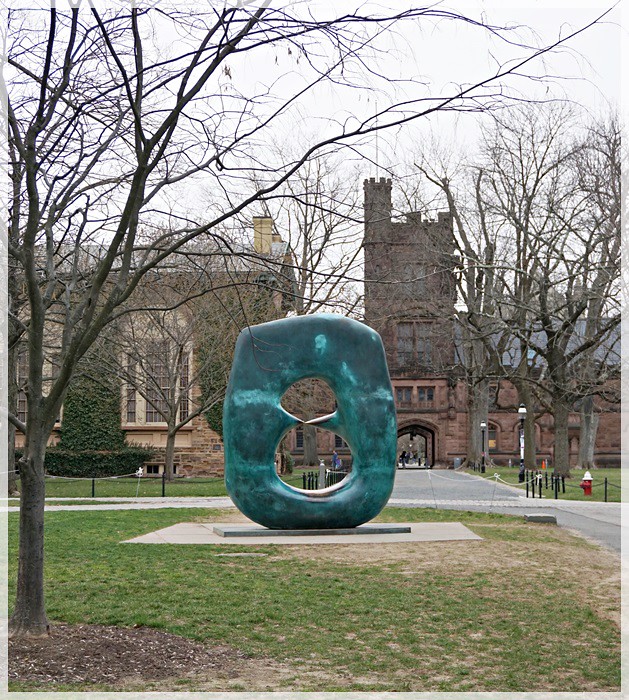 “I would rather have a piece of my sculpture put in a landscape, almost any landscape, than in, or on, the most beautiful building I know.” ~ Henry Moore, English sculptor.

This bronze sculpture was created and installed in 1970 and is 11 feet tall. It is said that within a few months of its delivery on campus, the interior curves of the oval had been burnished through contact with bodies sitting on it. Madiha, and I are equally guilty; we did spend a few minutes sitting on this sculpture and taking countless selfies.

The inspiration for this work of art was derived from one of Moore’s favorite objects—an elephant skull acquired in East Africa by a scientist, who initially placed the skull in his garden, but then eventually gave it to Moore after sensing his fascination with its “strange, brooding presence.” 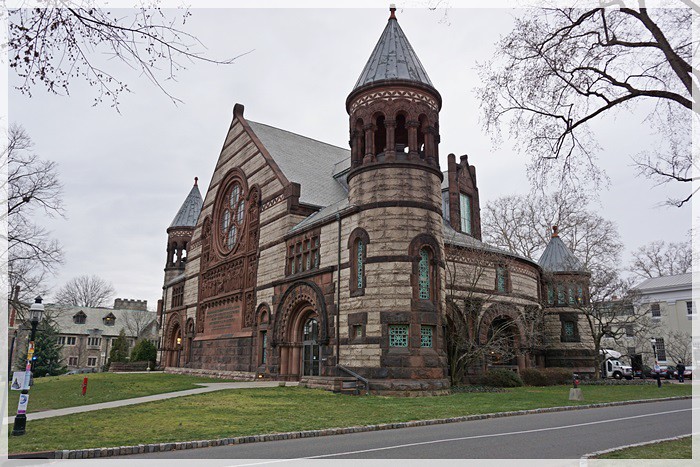 Once upon a time, around 126 years ago to be exact, the trustees of the College of New Jersey (as Princeton University was then known) realized that the institution needed a hall big enough to seat the entire student body for commencement and other large gatherings. An extremely generous Mrs. Harriet Crocker Alexander donated the money for such a building to be named in honor of her husband, her husband’s father, and her husband’s grandfather. Construction on Alexander Hall began in 1892 and was completed two years later.

Years later, in 1984-85, David A. Richardson of class ’66 offered a major donation in memory of his father. As a result, Alexander Hall was extensively renovated and renamed Richardson Auditorium.

Based on my research, Alexander Hall’s design drew on several architectural sources, mostly Richardsonian Romanesque in style, as evidenced by the contrasting rough-faced granite walls and brown sandstone trim, as well as the steep gabled roof with tall dormers and zigzag detail under the eaves. 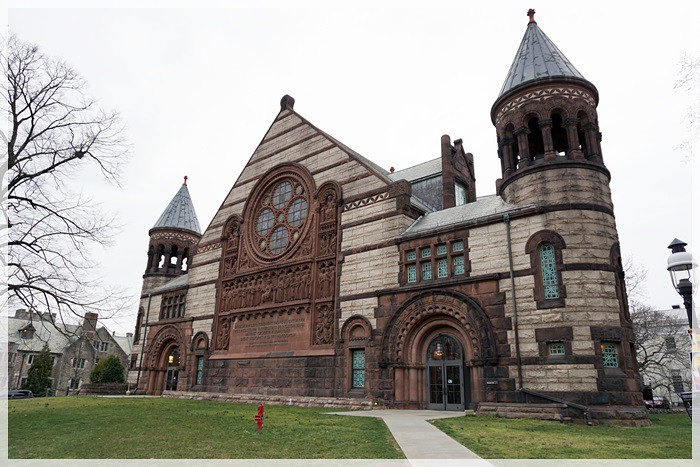 Buddy Graham, winner of six Grammys and one of the most highly regarded engineers for symphonic recording in the late twentieth century, listed Richardson Auditorium as one of the world’s acoustically “great” concert halls.

This five-story dormitory was built in 1870. John F. Kennedy lived in this dormitory during his short stay at Princeton (one semester) in 1935. 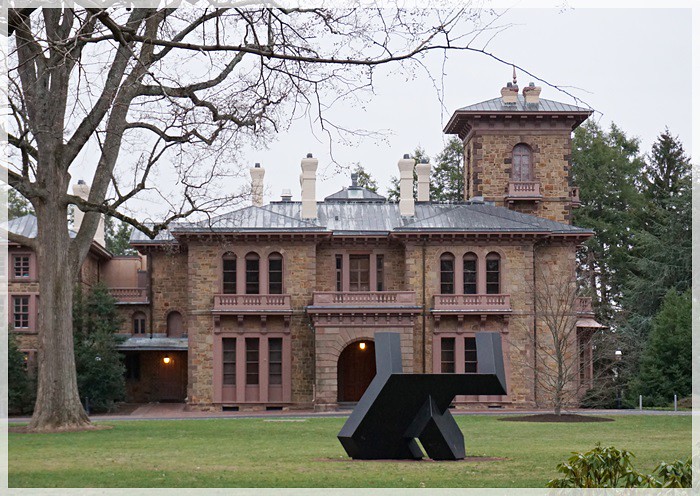 Smith’s work consists of complex polyhedrons, inspired by his study of mathematics and crystallography. His sculptures explore the relationship between form and scale as well as perception and location. Smith titled his sculptures only after the maquettes had been finished.

This sculpture was funded by the family of Lieutenant John B. Putnam Jr., a Princeton student and United States Air Force pilot killed during World War II. 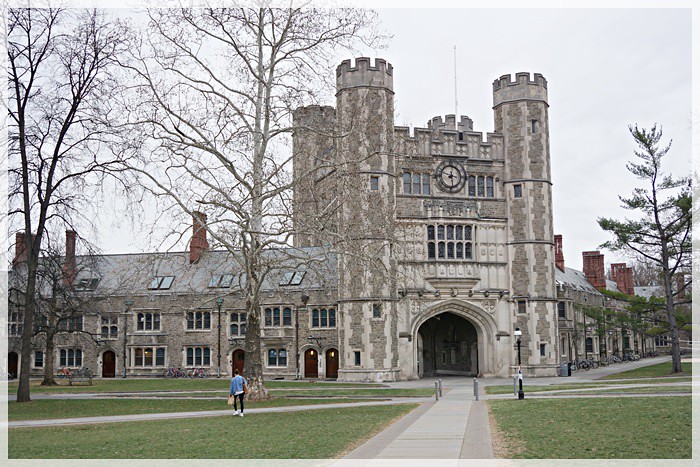 Originally the Pennsylvania Railroad tracks came to the foot of the broad steps leading up to Blair Arch, which served as the entrance to the campus for visitors arriving by train. This was a convenience for most people, but a mixed blessing for students living in Blair; the puffing engine parked below often kept them awake and the soot from its smokestack blew into their rooms.

There was so much more to see, and I have way too many pictures left to edit and research about! Like I said earlier in this post, we started quite late, and it was raining and cold. Regardless, we were in complete awe by the architecture and history of this prestigious institution. Speaking of architecture, I have visited the Harvard University campus three years ago and noticed that while Harvard’s buildings were mostly made of red bricks, Princeton’s made use of gray ones.

It was dark by the time we decided to walk back to the car, taking quick glimpses through the pretty shop windows and stopping briefly to enjoy a hot cup of chocolate (with marshmallows, of course!). Perhaps I’ll share pictures from our window shopping next time.