Several leisure and theme parks opened in Dubai late last year, one of which is Bollywood Park. It is the smallest property within Dubai Parks and Resorts, a massive park containing two other theme parks: Motiongate Dubai and Legoland Water Park.

When Masood and I received invitation to visit Bollywood Park during the promotion of Jolly LLB 2 movie, I immediately accepted because I’d wanted to visit the park for some time now. Frankly, I find the entry ticket to the park very expensive so I’d been putting it off.

We had been emailed media passes so we got ourselves complimentary parking. From the massive parking lot, a shuttle bus took us inside Dubai Park and Resorts. Consider this ride a mini tour. We were already 40 minutes late because of traffic, plus we entered the VIP parking instead of the Visitor’s Parking by mistake.  However, in typical Bollywood style, the actors were 70 minutes late and so we had the time to explore the park and enjoy a couple of rides!

Security inspects all bags at the entrance.

We went on a Saturday and yet there wasn’t much crowd. The staff members were all extremely courteous, pleasant, and helpful. The signage helps one navigate the park. And the February weather makes an ideal time to visit a park in Dubai.

Bollywood Park feels like a brand new, medium-sized movie set. Having visited the Universal Studios in Hollywood, I couldn’t help but compare the two theme parks. I know it’s unfair, but that’s how it was.  Bollywood Park is tiny in comparison.

There are very few rides. There are several gift shops all over the place but nobody seemed to be buying much. 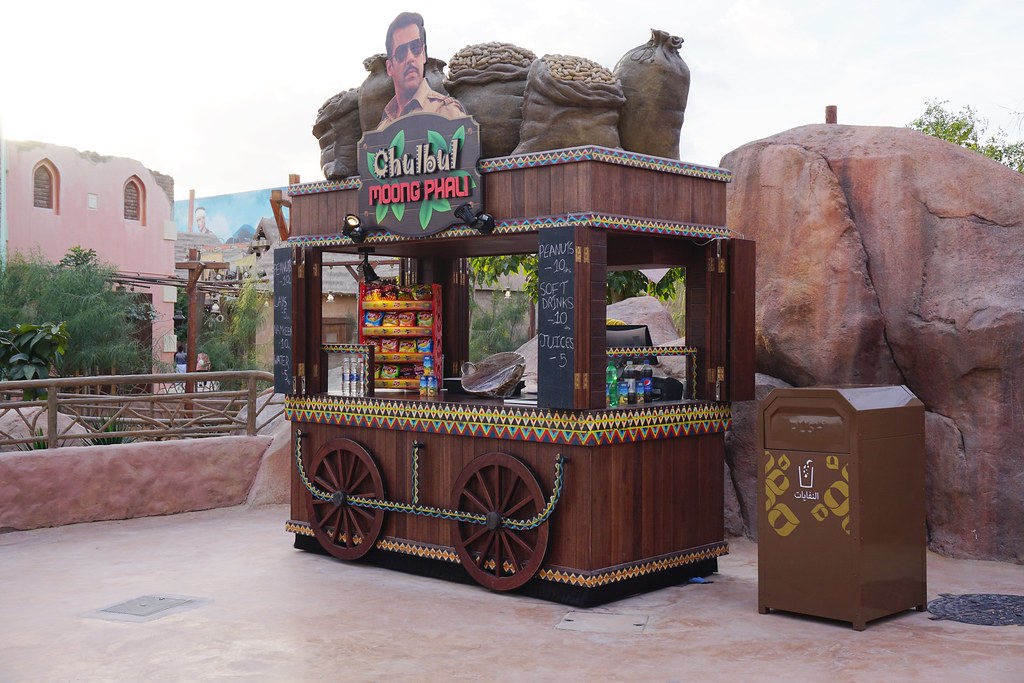 There are a lot of food kiosks and restaurants in the Park. We had vada pav and tea. The snack is supposed to be piping hot when served and must contain a generous amount of green chutney. Unfortunately, the one we had at the park was served cold and bland. The tea, however, was really good. 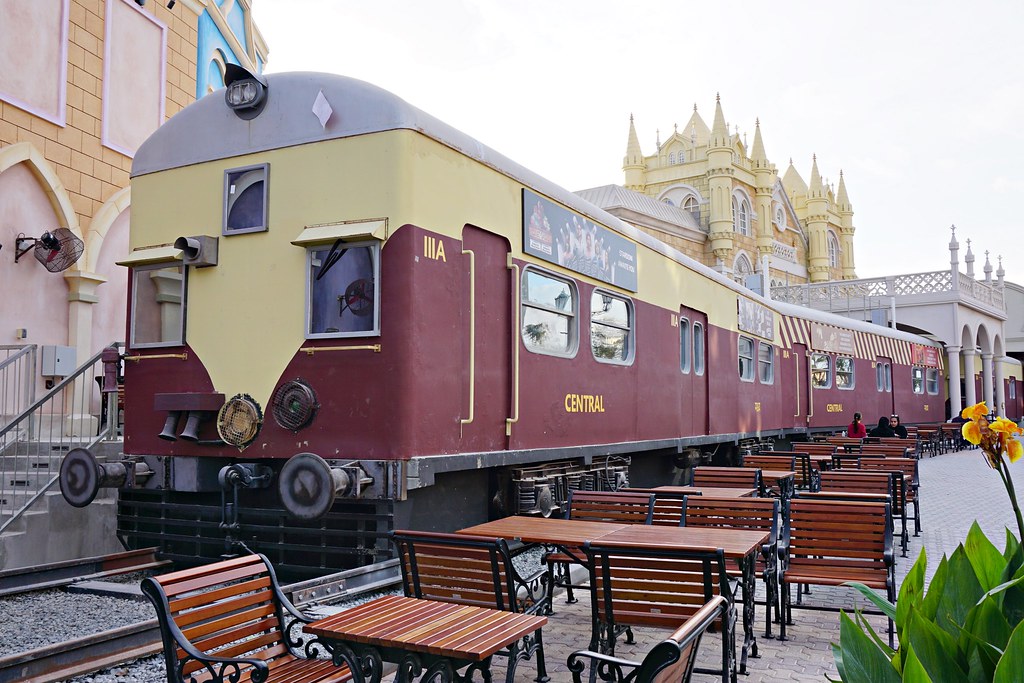 I love Indian trains! This one is a recreation of the famous Victoria Station—one of the train stations that I absolutely love for its architecture—offering Mumbai’s famous fast food and featuring performances on the roof of a train. Besides, chugging trains are an ever-present image in Bollywood films, so it makes sense to include this in the park.

Lagaan: The Thrill of Victory 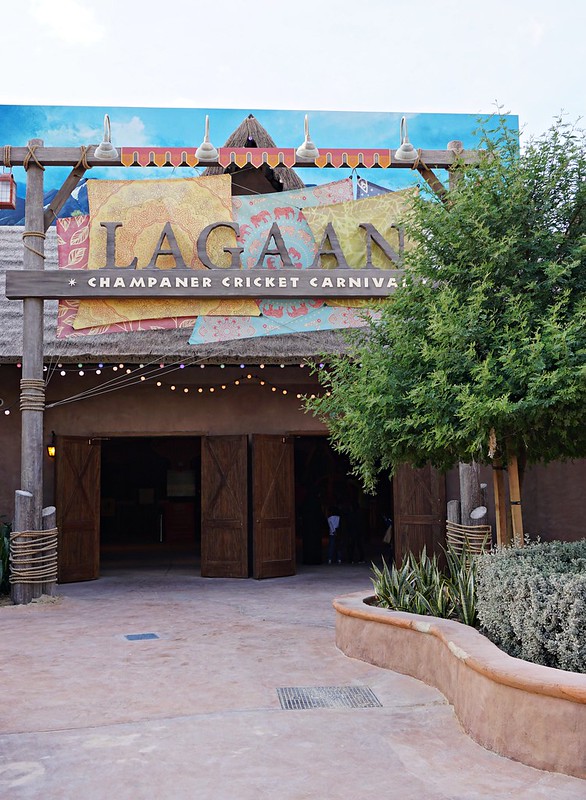 Inspired by Aamir Khan’s 2001 sports-drama film Lagaan, this ride is my least favorite. It’s a roller coaster motion simulator, where the seats move in sync with the actions on the screen. Everything about the events leading up to the ride was fun: the photos of the movie characters on the wall as you queue, a nice video of Aamir Khan, and the interiors of the room. No 3D glasses are required. You just sit, watch the screen and feel your seat move.

The graphics are okay; I did not find it extraordinary, though some people found it really good. The girls sitting next to me screamed with delight and excitement the entire time. I’m not a fan of cricket so maybe that’s why I didn’t enjoy this much. You can see this Youtube video to give you an idea. 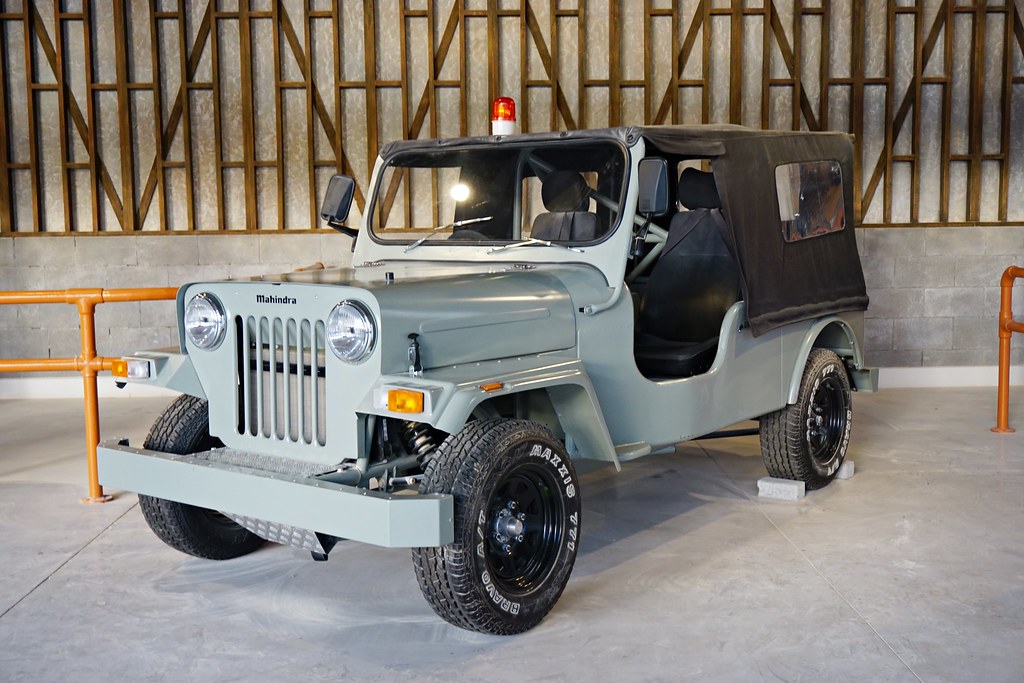 This show is inspired by Salman Khan’s movie Dabangg, which is set in the Indian state of Uttar Pradesh, and tells the story of a corrupt but fearless police officer, Chulbul Pandey, and his troubled relationship with his stepfather and half-brother.

The show began with three ladies dancing on that silly Fevicol song, during which 5% of the audience walked out of the hall. Once the dancing was finally over, a group of men portraying the role of hooligans came onto stage and kidnapped the girls, taking one hostage and tying her up. Turned out she’s the hero’s wife. The men did some stunts, delivered a few dialogues quite painfully, and basically pretended (quite unsuccessfully) to be the bad guys. But wait, was this supposed to be a comedy show?

In comes the hero, Chulbul Pandey, in his jeep. He fights the bad guy and rescues his wife. The actor playing the hero did a good job with the fighting scenes. But the play dragged on unnecessarily and failed to capture the audience’s attention for long. Half the room was empty before the show ended. 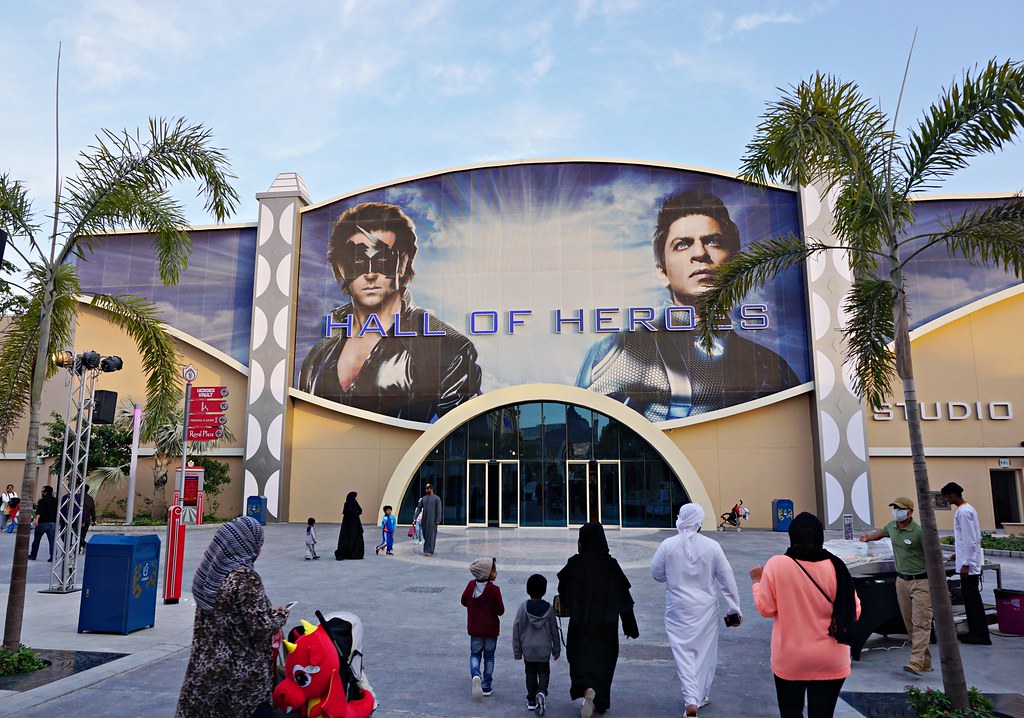 This one is a 4D multi-sensory virtual ride based on Sharrukh Khan’s movie Ra.One, which is about an Indian science fiction superhero film.

The story is basically about a game designer who creates a motion sensor-based game in which the antagonist (Ra.One) is more powerful than the protagonist (G.One). Now the bad guy escapes from the game’s virtual world and enters the real world and makes it his mission to kill Lucifer, the game ID of designer’s son (the only player to have challenged Ra.One’s power). Relentlessly pursued, the family is forced to bring out G.One from the virtual world to defeat Ra.One and protect them.

Before we enter the main room, we were showed a brief 3D holographic projection that tells us a little about the game and what’s at stake. I must say this was pretty impressive. The ride was fun and engaging because of the movements, the wind blowing over our heads and under our seats, and the occasional mist released on our faces to complete the experience. Actually, they should go a little easy with the water. People were wiping their faces when the ride ended.

This 4D flying theatre ride gives you panoramic views of India’s spectacular landmarks and a front row seat to the battle to save Earth from an alien invasion.

Now, before we were allowed to enter the room, there were instructions to approach a member of the staff if one has fear of flying or heights. This prompted a lady to actually ask a staff whether we were indeed flying for real!

Krrish is a 2006 Indian science fiction superhero film starring Hrithik Roshan. It about the story of Krishna, who inherits his father’s superhuman abilities. He falls in love and follows the girl to Singapore, takes on the persona of “Krrish” to keep his identity secret, and saves children from a burning circus. From that moment on he is regarded as a superhero, and must later thwart the plans of the evil Dr. Siddhant. The film is inspired from the Hollywood film Paycheck.

One of my favorite rides in the park! If there is only one ride you can take, this one must be it. There’s a huge panoramic screen and the seats are strategically positioned so that  your feet no longer touches the floor and you feel like you’re suspended in air, flying over famous Indian landmarks while witnessing an epic battle with superhero Krrish.

Sholay: The Hunt for Gabbar Singh 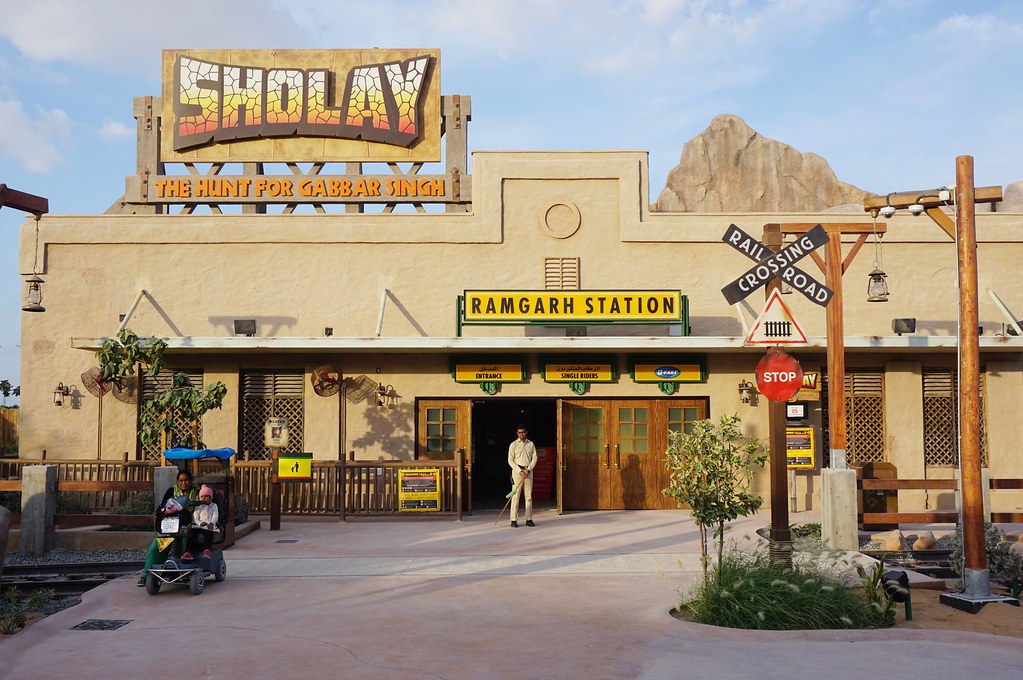 Another one of my favorites! I had so much fun with this ride.

Sholay is a 1975 Indian Hindi-language action-adventure film. The movie is about two criminals, hired by a retired police officer to capture a ruthless dacoit. Shelly, considered a classic, is one of the best Indian films. It was ranked first in the British Film Institute’s 2002 poll of “Top 10 Indian Films” of all time. In 2005, the judges of the 50th annual Filmfare Awards named it the Best Film of 50 Years.

This 3D interactive dark ride arms you with laser gun, which we didn’t see at first because it was dark and nobody really told us, so when I noticed the silhouette of the two guys in front of me holding guns, I noticed I had one in front of me too! We were to use these guns to shoot the dacoits who are led by the terrifying villain Gabbar Singh from the movie.

Now, you have to compete with your friends to score the most hits. The thing is, I haven’t seen the movie before, and I began firing and killing the good guys! Masood, quite alarmed, kindly pointed out the villains we needed to kill in order to score points.

It was also fun shooting at the mangoes on the trees!

At the end of the ride, our total scores were flashed on the screen along with a photo of us with our 3D glasses on and a gun in our hands. I looked quite the professional sharp shooter in the picture … just don’t look at my score. 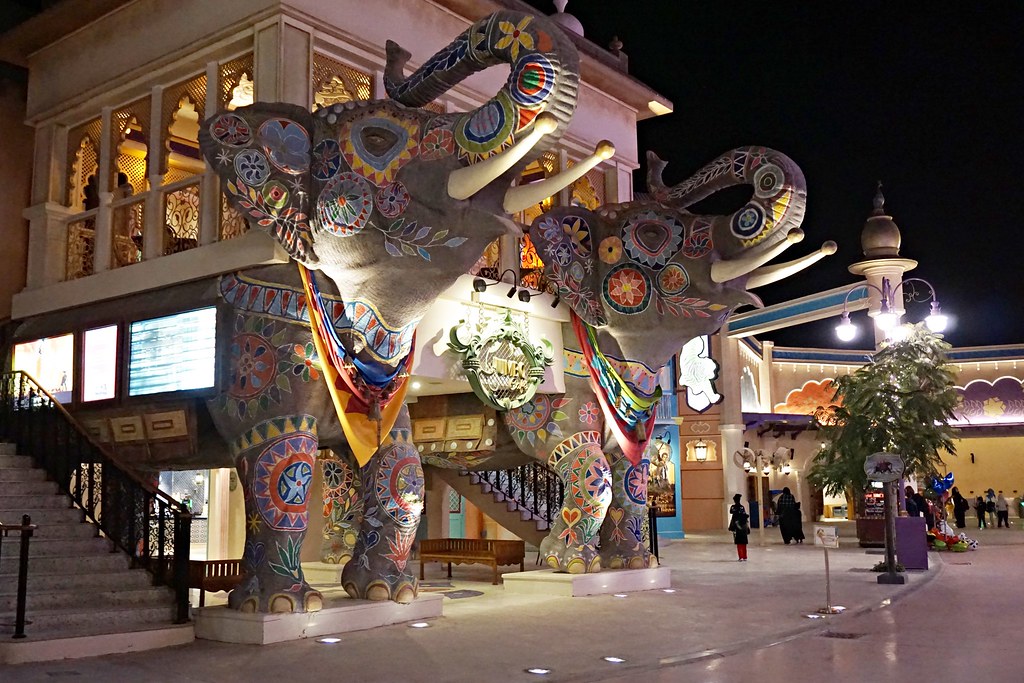 Besides the two rides—Krrish and Sholey—I wasn’t impressed. I don’t know…maybe I had higher expectations? Or perhaps because with regular tickets priced at AED 285 ($78) per person, I expected more rides.

The park is clean and safe. There is a massive parking lot. It’s completely wheelchair accessible (love this about Dubai!) and clean bathrooms. There two prayer rooms. It is, however, located quite outside the city center.

How to Get There By Public Transportation:

Take the red metro line south all the way to the end station Jebel Ali. From there on, take a taxi for the short remaining distance to Dubai Parks and Resorts.

How to Get There by Private Car:

From Downtown Dubai, head south of Sheikh Zayed Road, past Dubai Marina and Jebel Ali, till you see Dubai Parks and Resorts on the left side of the road. The journey shouldn’t take more than 40 minutes.

Serving up chai in a kulhar

Al Jawahar Restaurant: Where India’s First Prime Minister is Said to Have Dropped by for a Meal

The Gold Souq at Dubai Mall

Proud To Be a T3 Trial Passenger!