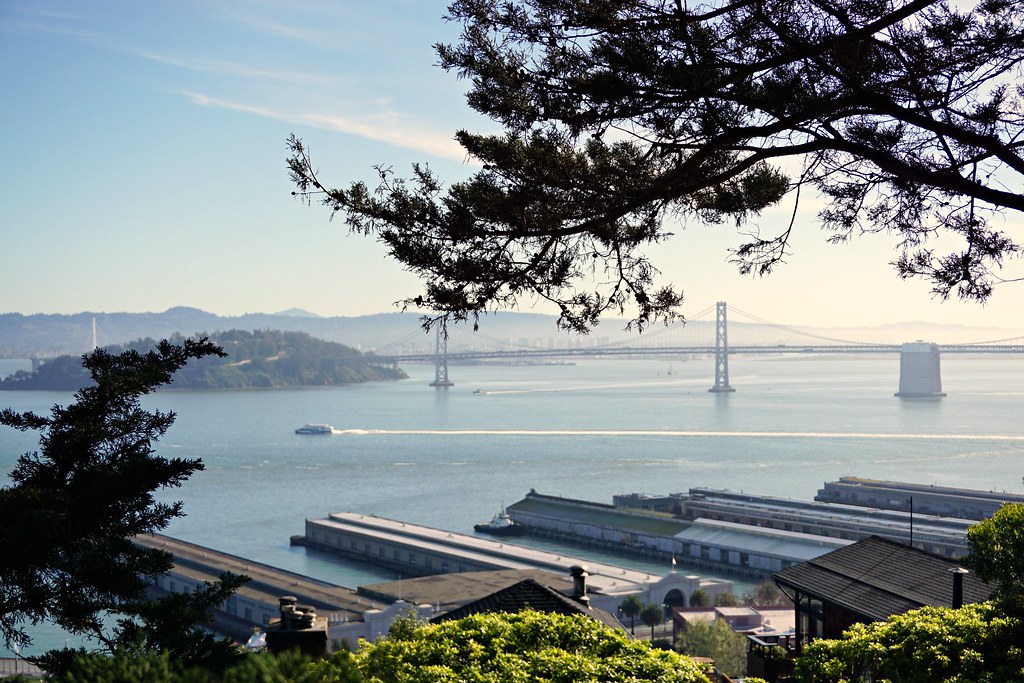 He pulls the covers back over his head, turns his back to me, and disappears in the warm cocoon of pillows and blanket. I need him awake and coherent now. The plan was discussed last night, and we had both agreed. I will not be deterred. We need to have an early start.

The lure of breakfast works and he finally gets up from bed and out of the hotel. Just behind where we’re staying is a restaurant that, according to customer reviews online, is famous for its breakfast. He changes his mind and orders French toast instead and I have salmon-shrimp eggs Benedict. Satiated and happy, he willingly agrees to go ahead with my plan. 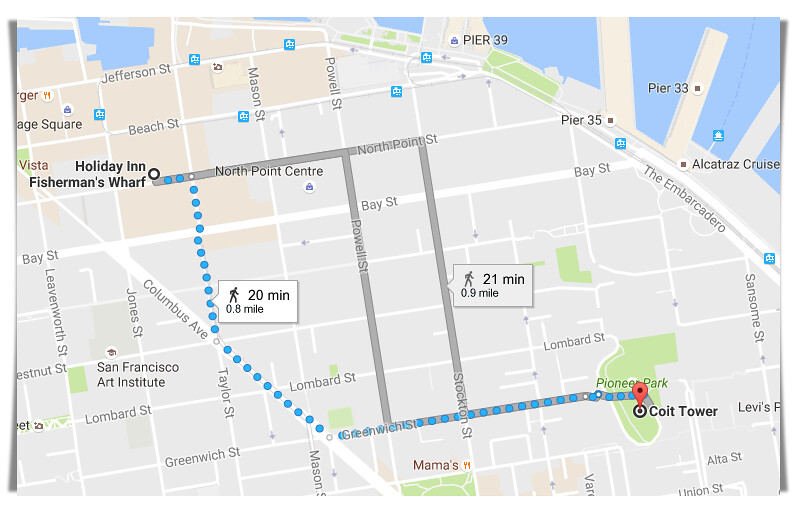 “See? It’s just a 20-minute walk!” I say a little too enthusiastically. He peers over my shoulder and looks suspiciously at the map on the screen. “I’m not worried about the distance,” he says, “and why do we even need to walk all the way there? Can’t we take a cab or the cable car? It will save us time.” I look at him. “For a 20-minute walk? Besides, I checked. Cars aren’t allowed to go all the way up there.” 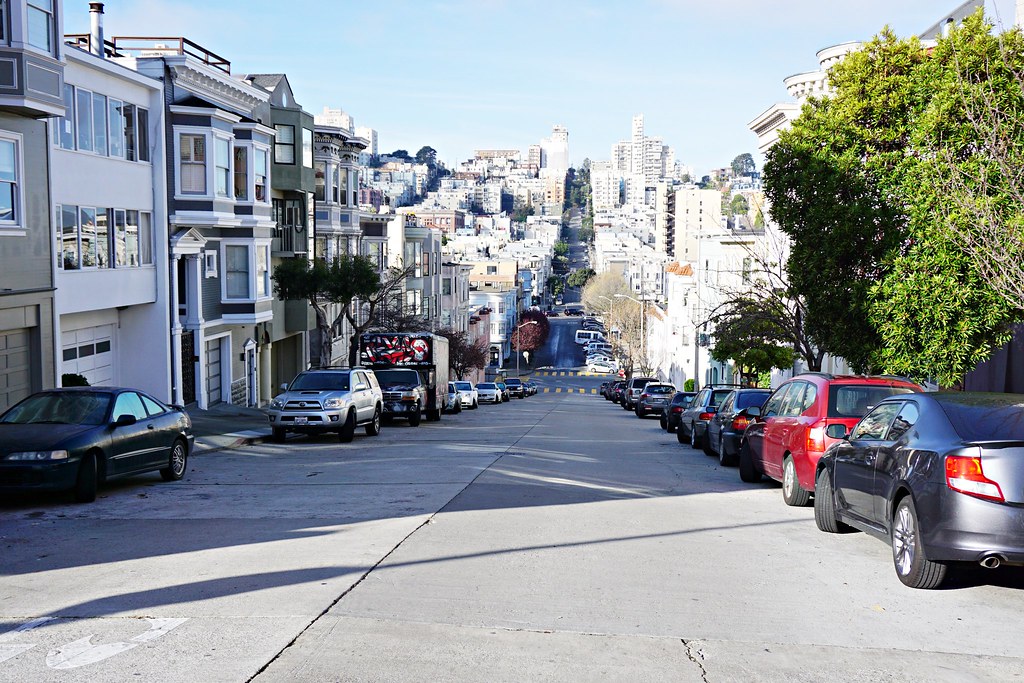 I am huffing and puffing, out of breath, and my light spring jacket feels very hot. I am having tachycardia and my legs are wobbly. I turn around and smile at Masood. He doesn’t smile back. He knew a 20-minute walk in this city is never a walk in the park. I pretend I’m breezing through the exhausting climb like I’ve been doing this since birth.

He glares at me, to be exact. “Where is that tower?!” he asks, pausing for breath. “Aren’t towers supposed to be visible from afar? I knew you were up to something!” He looks down to the main road, then looks around him. “Do you notice that sensible people are still fast asleep in their homes?” Now he is being overly dramatic. Of course, people would still be in their homes. It’s only 7 am. And it’s a Sunday. They aren’t tourists like us. No reason to climb hills and mountains early in the morning. This is their regular everyday street. 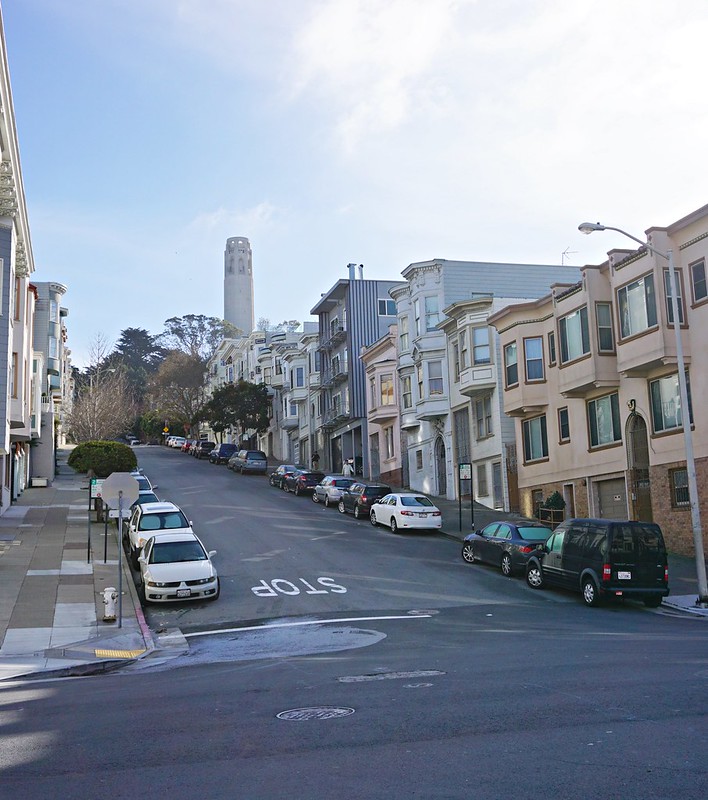 “There it is,” I exclaimed cheerfully, pointing at the tower, “just a few steps away!” He takes one look and says,”Do not be deceived. That’s an illusion. It’s probably ten more miles away.” I roll my eyes.

You see, Masood has been, for more than a decade, working in a company that requires him to start his day at noon and wrap things up by 9 or 10 in the evening. This has been his lifestyle for more than ten years. A regular day for him starts at noon, and he is most active after sunset. This is the reason why he detests almost all my plans that require us to be out and about early in the morning. For him, 9 am is too early in the morning. I drag him out of bed at 6 am today which, by his timezone, is still pretty much middle of the night.

We continue walking uphill. Is this ever going to end? Warning: Telegraph Hill is seriously steep. 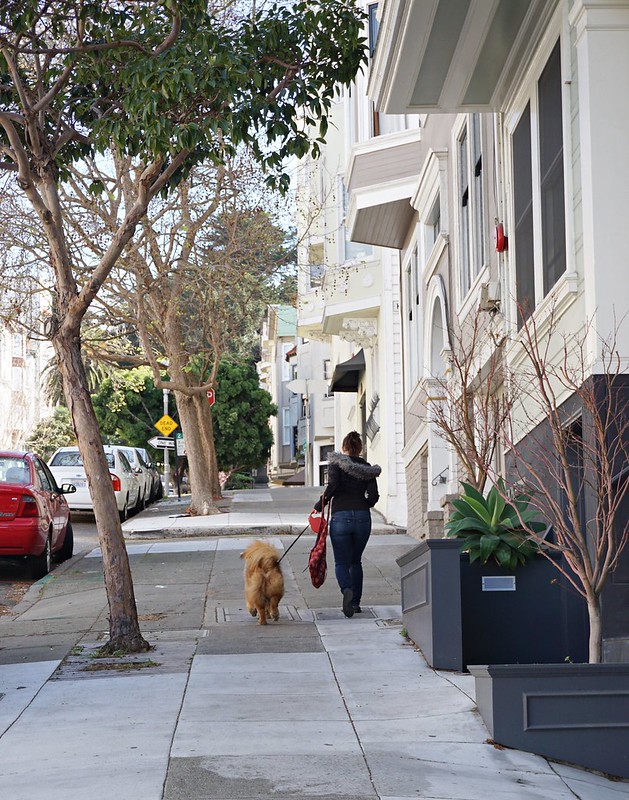 A woman who I am certain did not appear on the same road until we were halfway up the hill, overtakes us. She is walking her dog, both of them leaping and bounding like gravity never existed. Too quickly, she is way ahead of us. I feel like an old lady.

At this point, while we’re both silently complaining about the climb, an elderly gentleman walks out of his front door and joins us. He gives us a smile, his blue eyes looking kind and friendly. “Oh good,” I think happily, “we can give him company thereby justifying our painfully slow ascend.”

The elderly gentleman, who I’m sure is more than seventy years old, briskly walks ahead us. Wonderful. 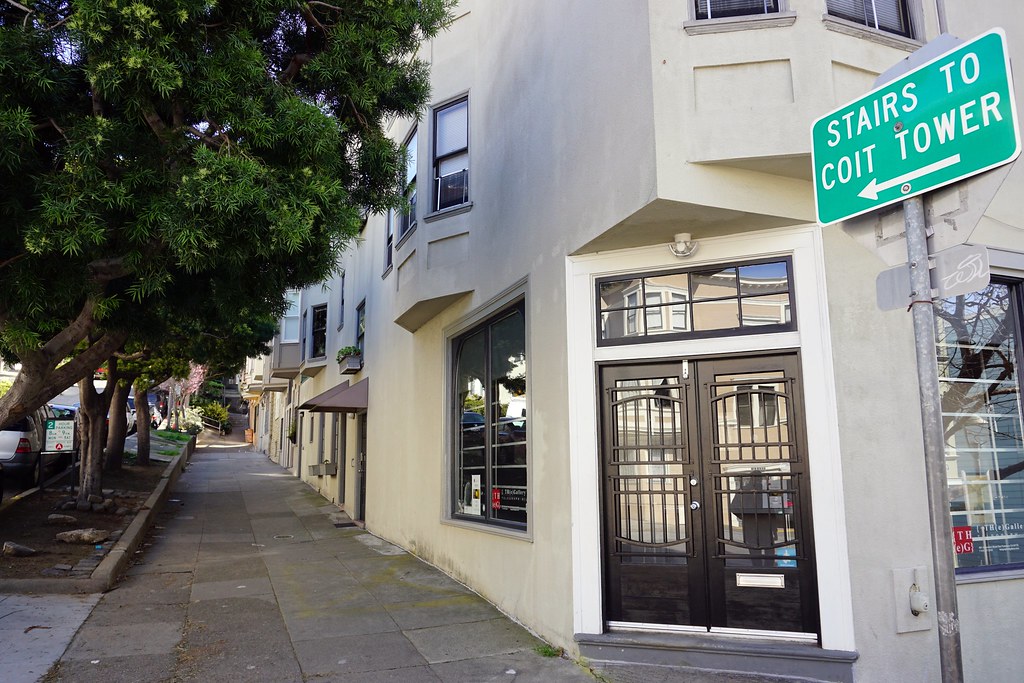 “Wait, you did not mention any stairs!”

Okay, I may have omitted certain things, like we’ll need to climb a few steps to get to the tower. So what if we almost never have to deal with stairs back home in Dubai. Aren’t these things obsolete already? Besides, we are young and healthy. Climbing stairs will come naturally to us. 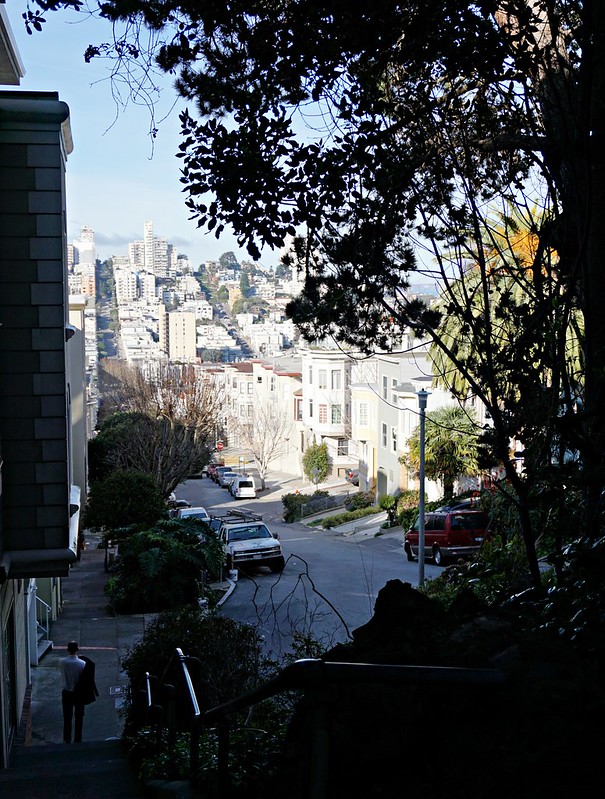 That guy in the picture above? He’s been most helpful. He is walking down while we are climbing up. We all greet each other good morning and then he says, “Good luck with the climb, you’re almost halfway there!” Masood and I look at each other. There’s more?! 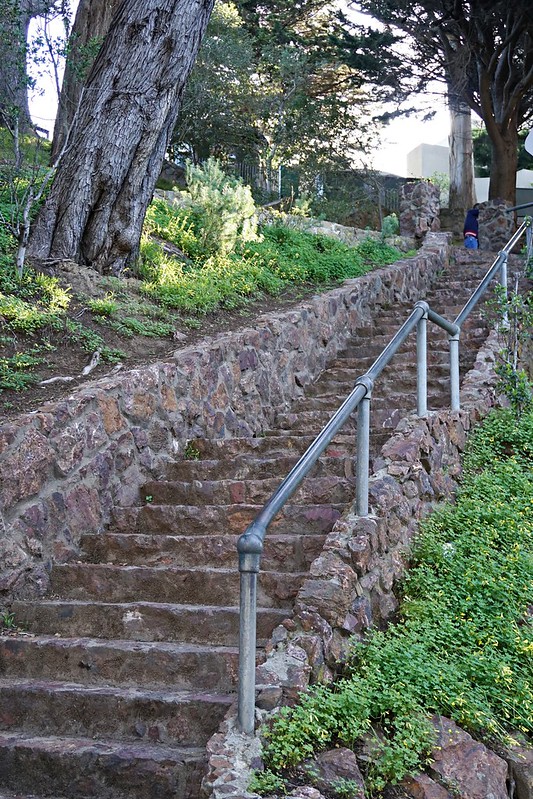 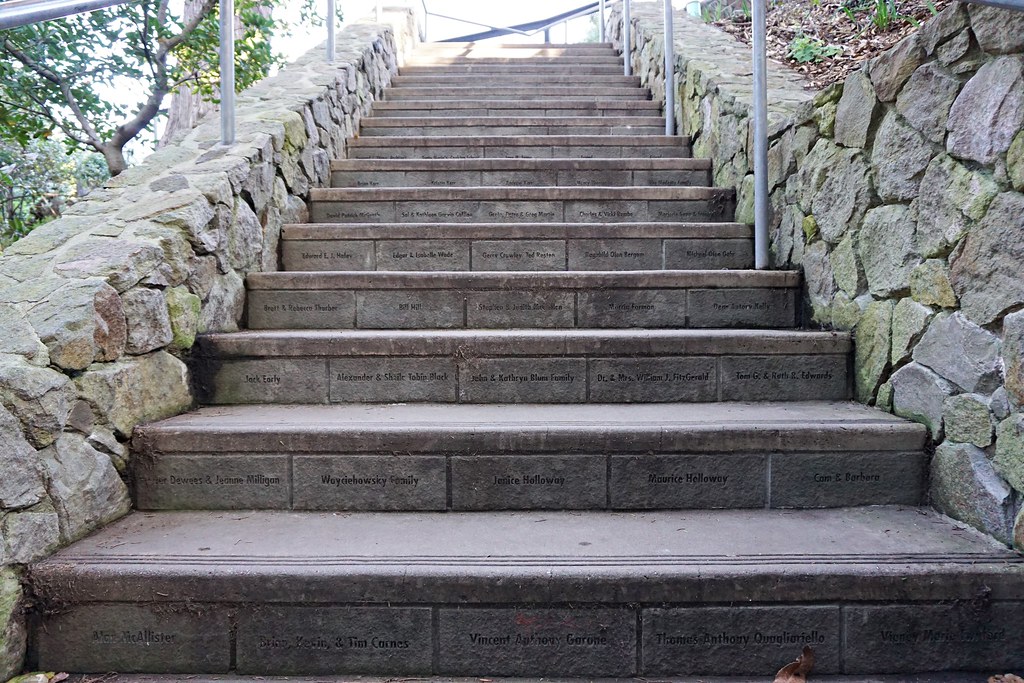 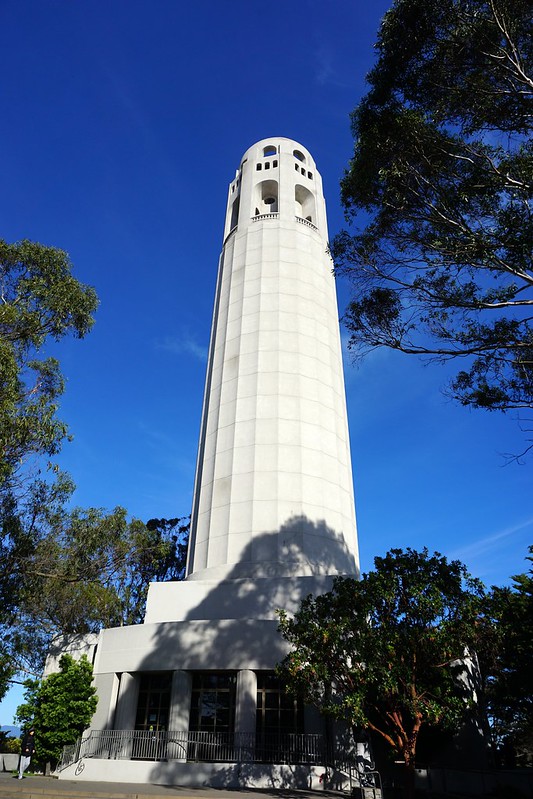 Finally, finally, we arrive at our destination. My first impression: Coit Tower looks like a lighthouse. Although, I believe it’s supposed to look like a fire hose nozzle. Now this 210-foot tower is named after a woman named Lillie Coit who, according to this website, was an eccentric “mascot” fire-fighter who smoked cigars, gambled in the mens-only storefronts in North Beach and wore mens clothing as a way to gain entrance.

The story goes that she was rescued from a fire as a child and from then she had this big admiration for the fire fighting team of San Francisco. When she died in 1929, Lillie left one-third of her estate to the City of San Francisco, which the city then used to build Coit Tower on Telegraph Hill.

“It’s still closed,” says Masood, “and doesn’t open till ten.” We still have a little over an hour to kill. The early spring air feels fresh and cool. The tower is surrounded by lush trees and colorful flowers. Birds are chirping high up in the trees. The Golden Gate bridge gleams proudly at a distance. The man I’ve promised to spend the rest of my life with is standing right in front of me. It feels perfect, like time is standing still.

“I’m on the top of the world lookin’ down on creation. And the only explana…”

Something drops an inch off my right foot. I instinctively pull back and look down. A bird, whose melodious chirping I had just been admiring a few moments ago, decided to poop on me! “Let’s get out from under this tree,” Masood is laughing so hard now. 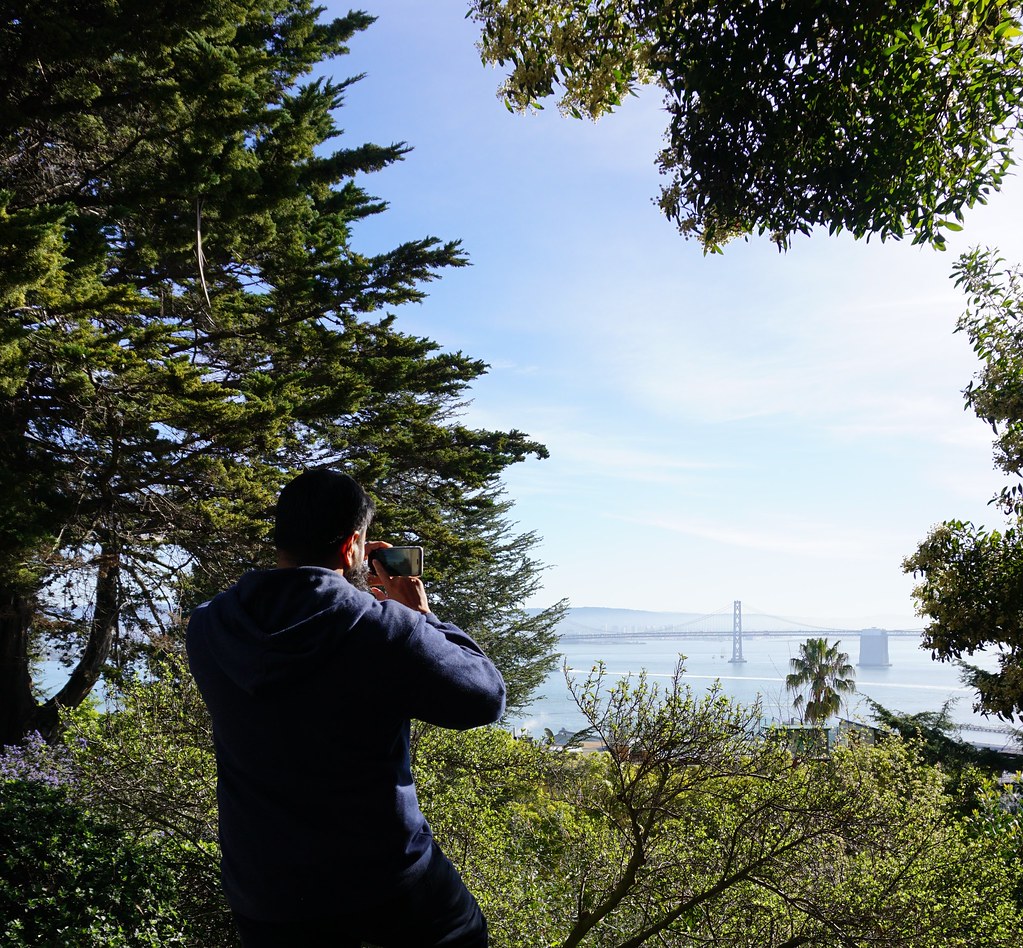 A concrete path leads all the way behind the tower and then back up front. There is a tiny garden off one side where one can enjoy the breathtaking view of the bay. I must admit: the Telegraph Hill is a great place to get a bird’s-eye view of the city.

We walk around the garden, admire the views, and take pictures. There are about six more people up here with us. A couple in their late fifties walks toward us. “Good morning!” they greet us cheerfully, each one of them carrying a pocket-sized Yorkshire Terrier strapped to their front. They are wearing brightly colored workout clothes, their wide smiles contagious. They briefly stand next to us, admiring the same view and casually chatting about the weather. 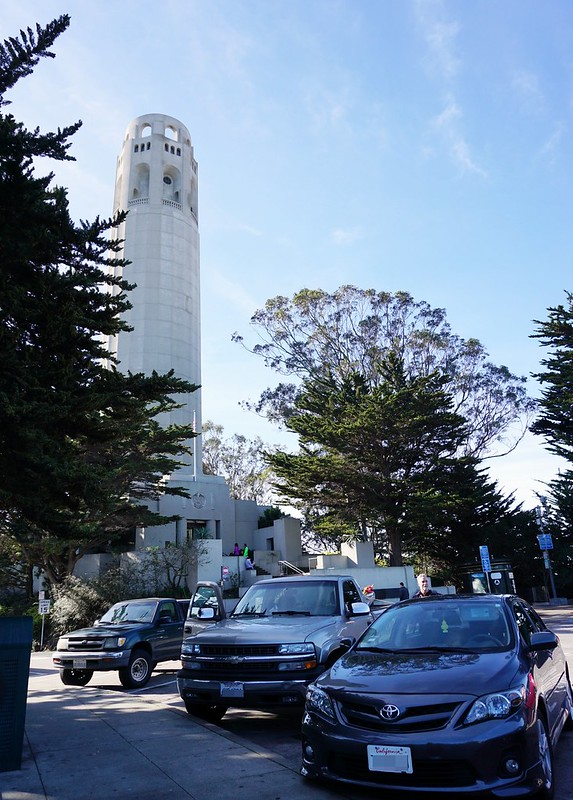 It’s almost time for the tower to open so we return to the front. More people have arrived. Masood notices the cars parked out front and turns to look at me with narrowed eyes. “Right … so cars aren’t allowed all the way up here, you said?” There are several ways to get to the tower, which I will share shortly, but yes, maybe I may have omitted certain details while discussing today’s plan with Masood.

The easiest way to get here is to ride SF Muni 39 Coit bus, which you can pick up at Pier 39, North Beach or other stops nearby. The 39 Coit runs every 20 minutes throughout the week. Taxis and limos can drop you off, but tour buses are not permitted. If you prefer to come on foot (nearly 85% of our visitors do), there are a variety of routes to bring you up the hill (ranging from a modest uphill stroll to a multi-hundred step athletic challenge). Driving yourself is another alternative, but parking at the top is very limited and long waits for a parking spot are not uncommon. There is a wheelchair ramp and an ADA-accessible entrance. 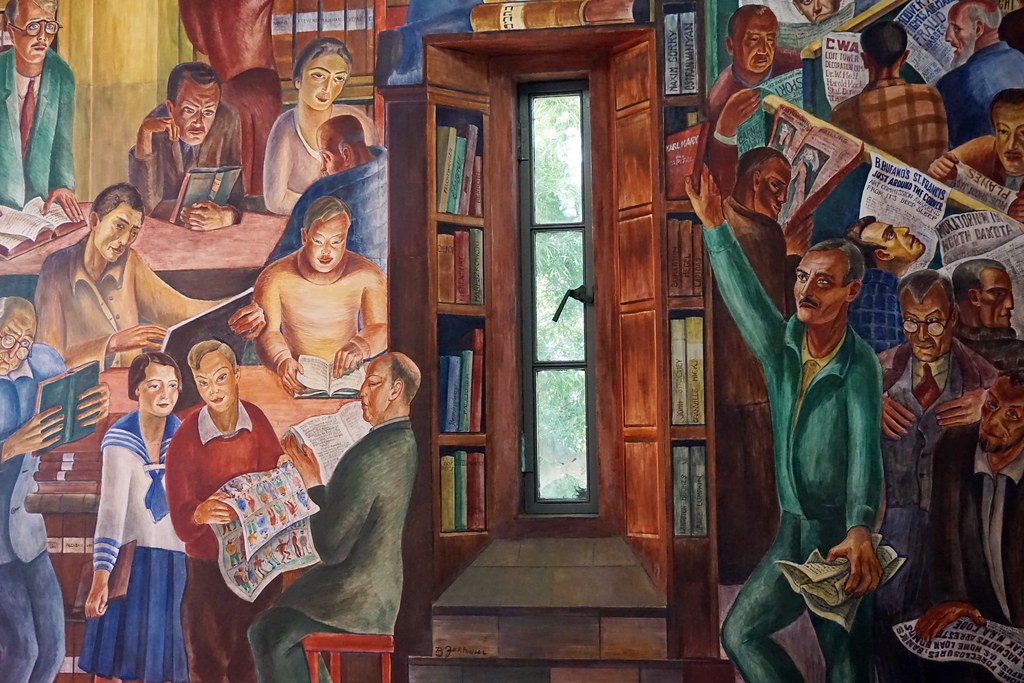 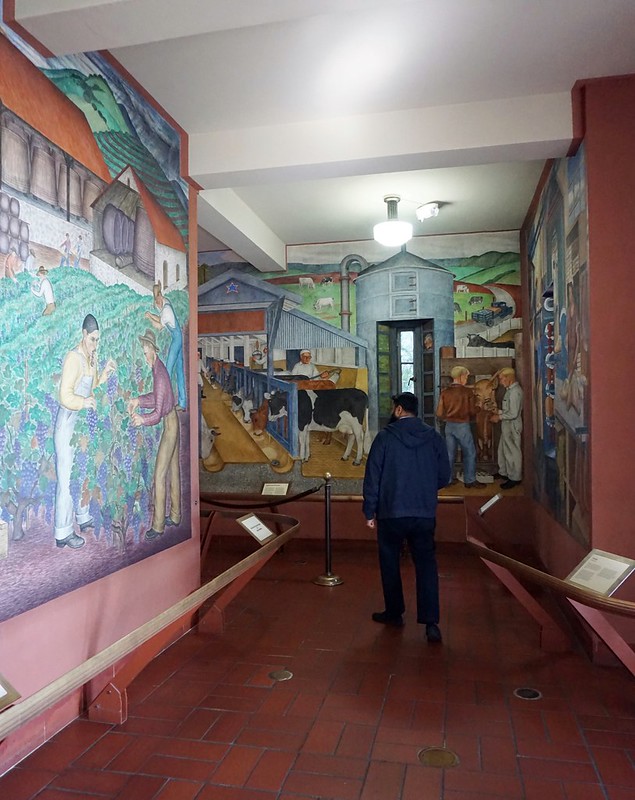 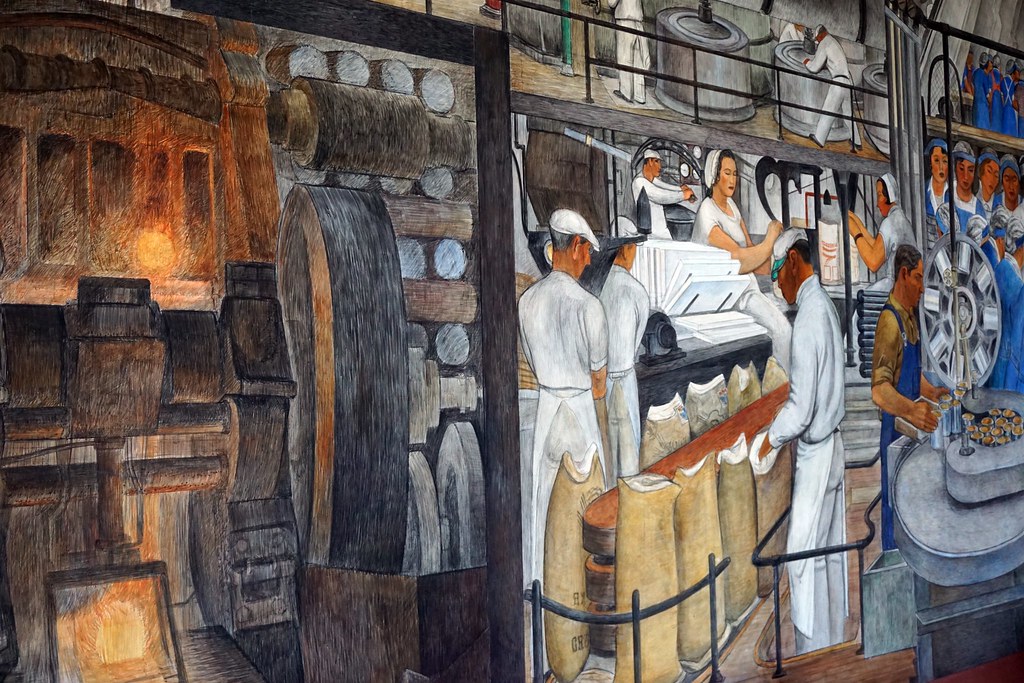 The door finally opens and we are admitted in. All the interior walls on the first floor of the tower are decorated with murals! The tower was built in 1933, the mural painting project completed by 1934. They depict the struggles of working class Americans specifically during the particularly disruptive period in US history (in terms of economic depression). 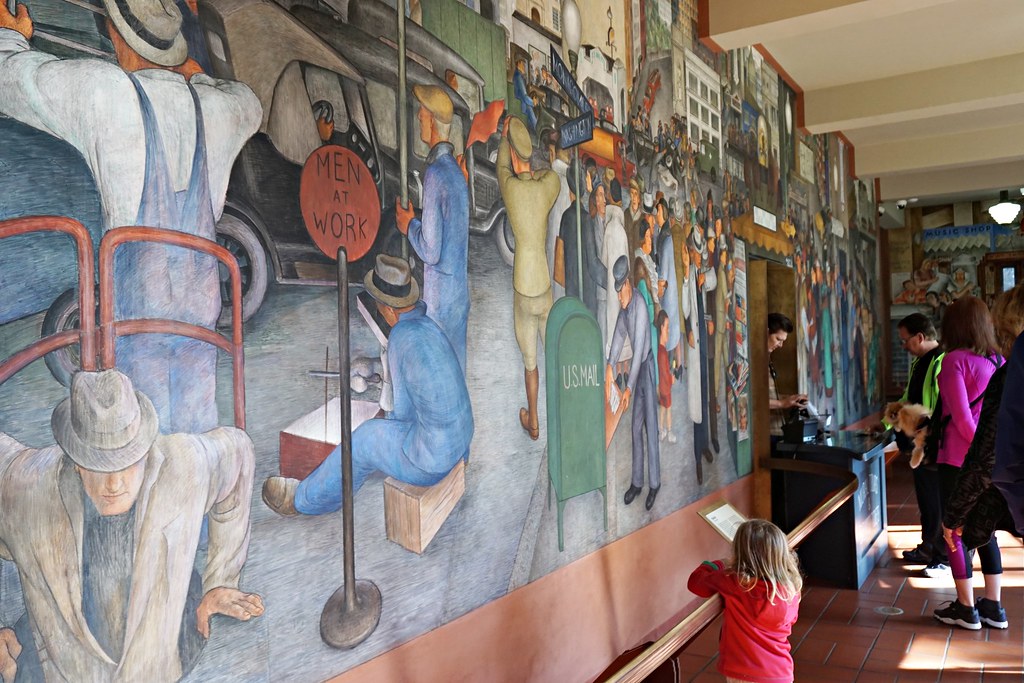 Entrance to Coit Tower is free, although there is a fee to take the elevator to the top: 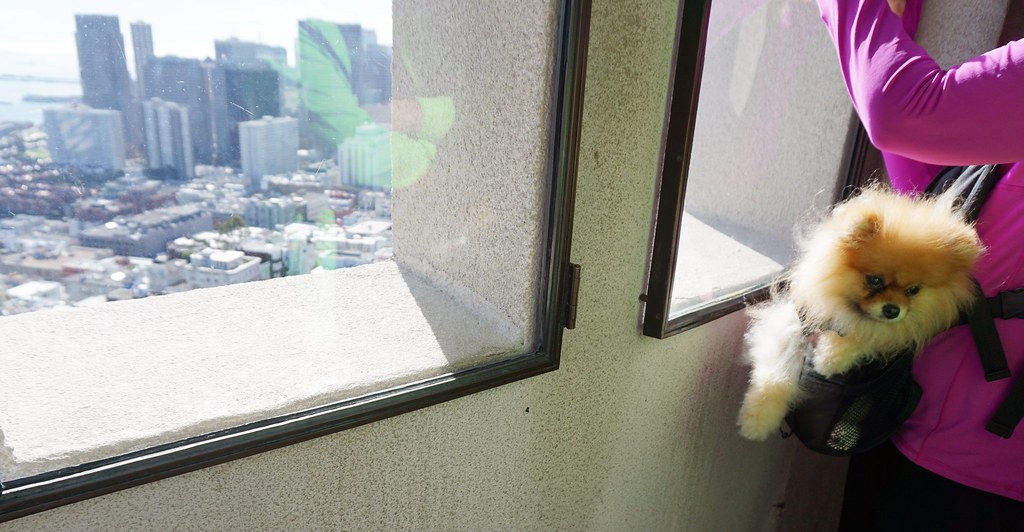 The elevator is a rickety old thing and I can’t help but question its safety and ability to transport us to the top of the tower. The crowd isn’t too international this time in the morning. In fact, besides Masood and myself, they all look and sound like Americans. Cramped inside the ancient elevator, the dogs become the main topic of conversation and they all begin sharing their respective canine anecdotes.

Coit Tower is not wheelchair accessible. Once off the elevator, one has to ascend a narrow stairway. And I think the last step is uneven or something because a couple of people lost their balance and almost tripped.

If you’re terrified of heights, don’t worry! It’s not scary up here at all. You’re inside the nozzle and we’re all windowed in. It’s actually nice and cozy up here. And there’s one of their staffs or volunteers keeping a constant eye on us.

I then spot an open window. This is the only window open so it’s always occupied. Who wouldn’t want to take pictures unobstructed by dusty glass? 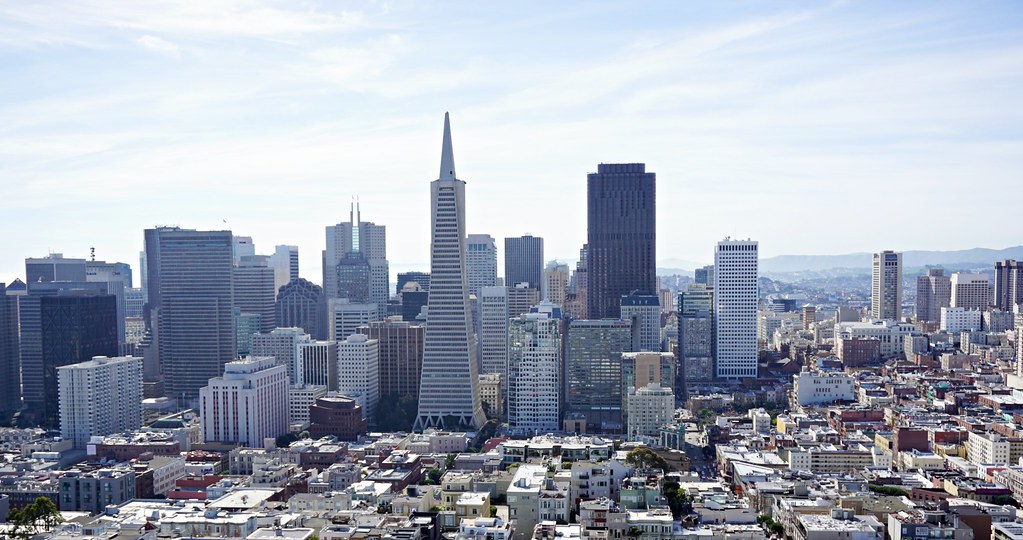 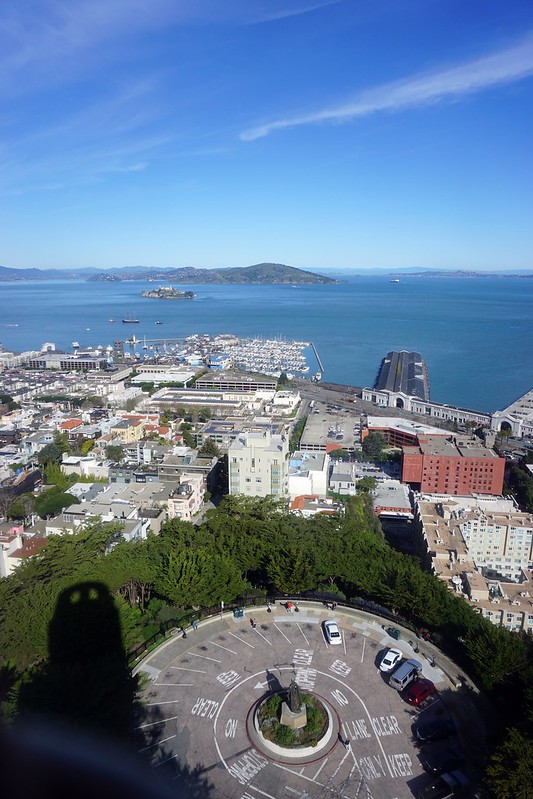 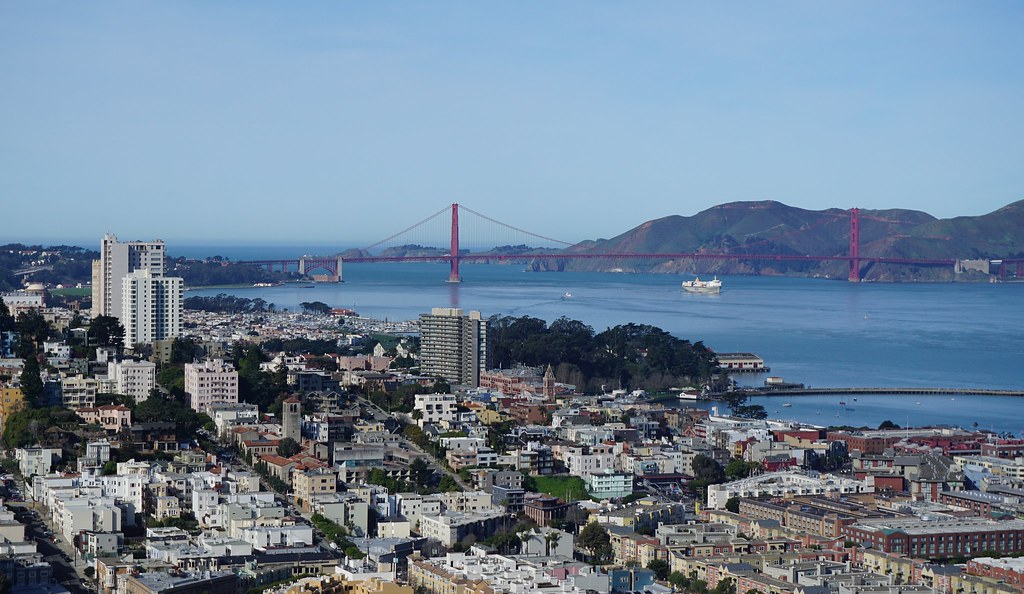 The panoramic views of the city from the top of the tower are spectacular! I highly recommend this to anyone visiting the city. Actually, even if you choose not to go up the tower, the views are amazing regardless.

The crowd grows as the day progresses and by the time we are ready to leave (you can stay as long as you want up in the tower), there is quite a long queue for the elevator. It’s definitely worth coming here in the morning. 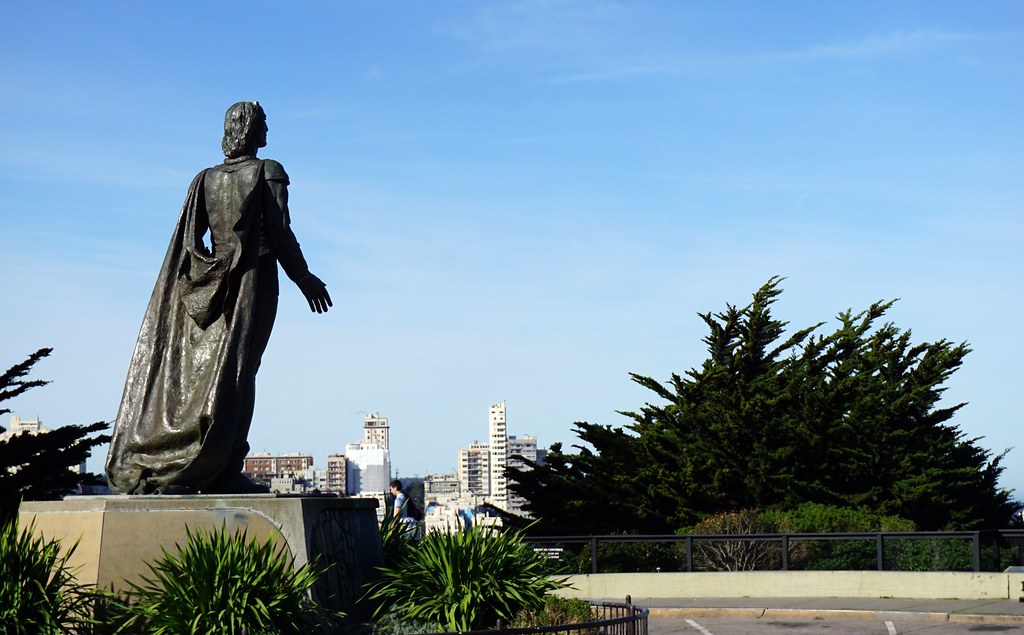 Just outside Coit Tower’s entrance, Cristopher Columbus stands on a concrete pedestal and gazes out at San Francisco Bay, while also keeping an eye on the parking lot.

It’s almost noon now. The parking lot is full and tourists from all over the world in shorts and colorful hats are busy taking pictures. It’s also getting warmer. We decide to head back to our hotel and grab lunch.

Obviously, the walk down is a breeze! People are climbing the stairs, out of breath and sweaty, and I smile at them in encouragement. “You’re almost there!” my smile tells them. “Yes, you can do it! It’s worth the hard climb!” 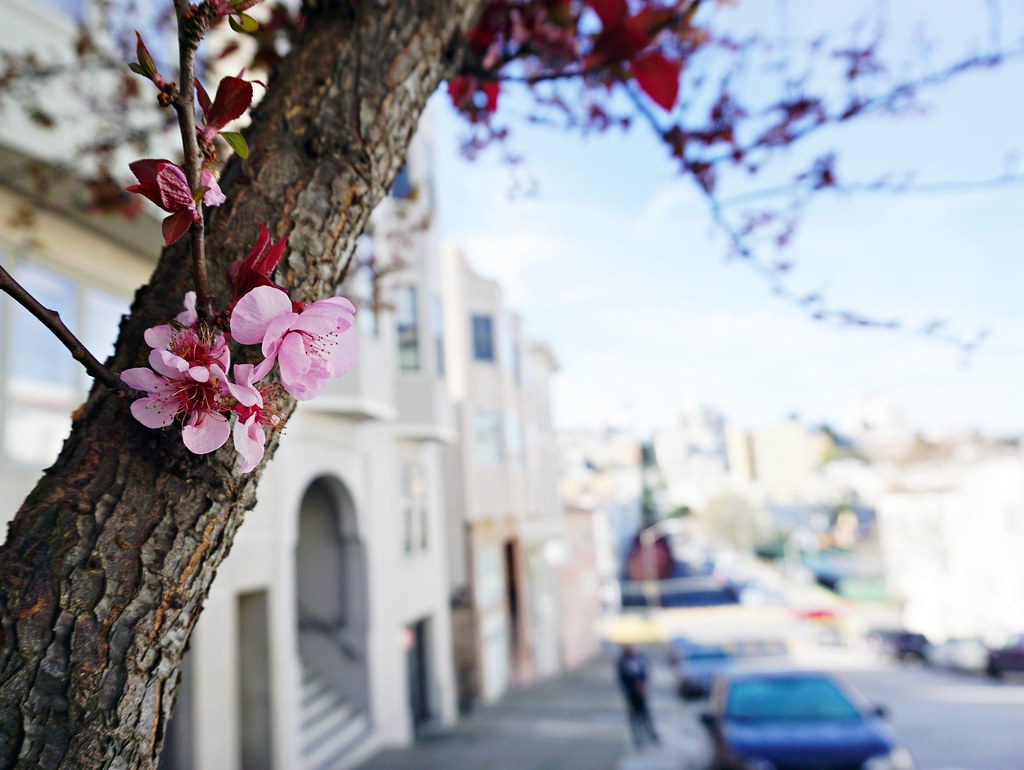