The forts and castles of Oman played a vital role in protecting the country from invaders. One such important landmark is the Taqah Castle of the Wilayat of Taqah.

Its walls were constructed from solid blocks of ‘Taqah stone’, a local limestone material composed chiefly of fossilised shells and corals, which was used extensively in ancient times and can still be seen at many archaeological sites in the region. The blocks were hand cut from shallow quarries using pikes and wedges and sealed with a protective layer of plaster, according to sources. 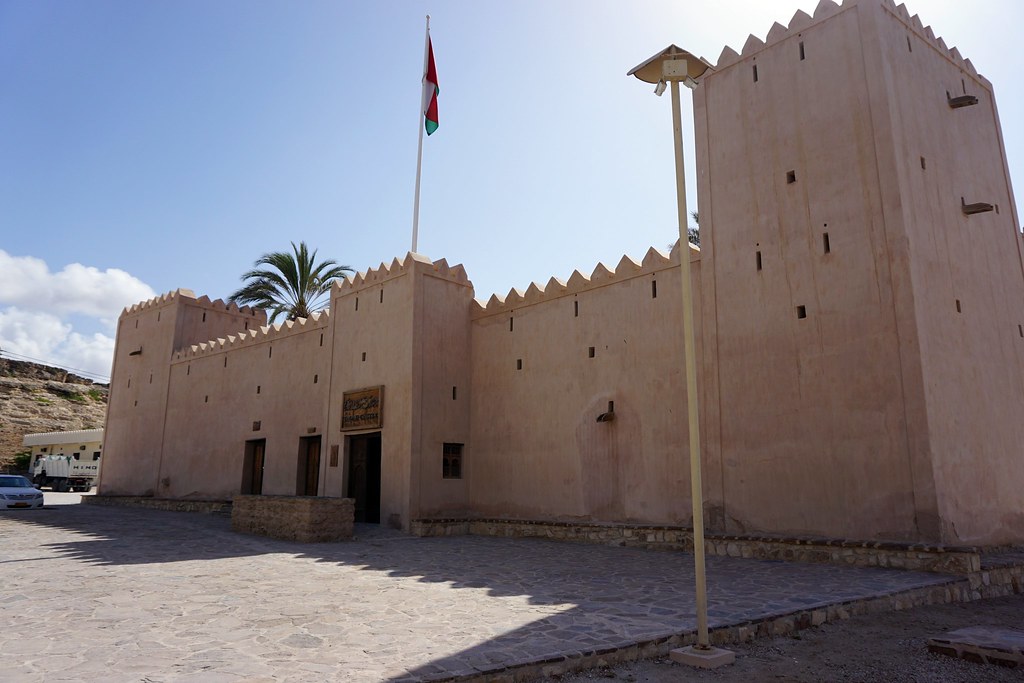 This castle was built in the 19th century as a private residence for Sheikh Ali bin Timman al Ma’shani. Later, during the reign of Sultan Taimur bin Faisal, this castle became government property and served as an administrative center and residence for a succession of local governors (called ‘walis’). 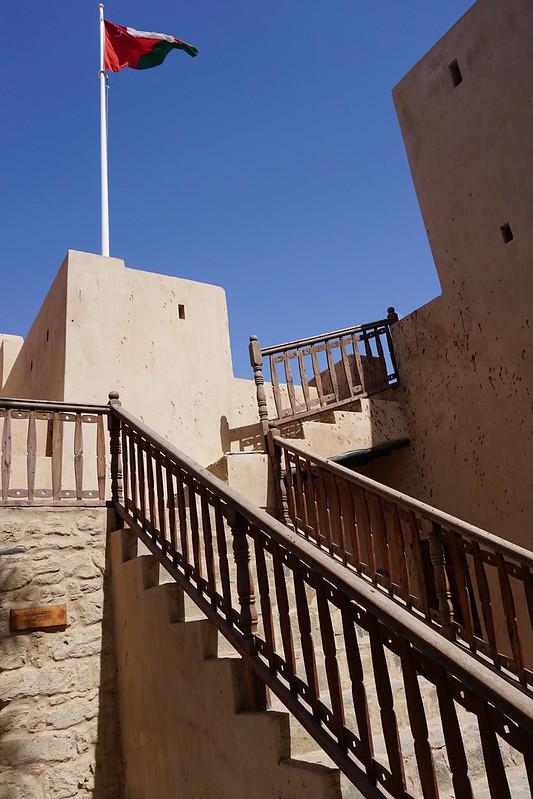 The Ministry of heritage and Culture assumed responsibility for Tanah Castle in 1991 and restored the castle in 1992, keeping its original design intact.

The Courtyard and Living Room

The castle has a huge courtyard in the middle of the building. The open space allowed for good ventilation and lots of natural light to pour in.

ln keeping with the defensive requirements of the day the castle’s ground floor rooms were occupied by a large retinue of soldiers and servants, who protected the wali and tended to the needs of his visitors. It housed the offices for palace utilities, security and administration. There’s a prison downstairs too. 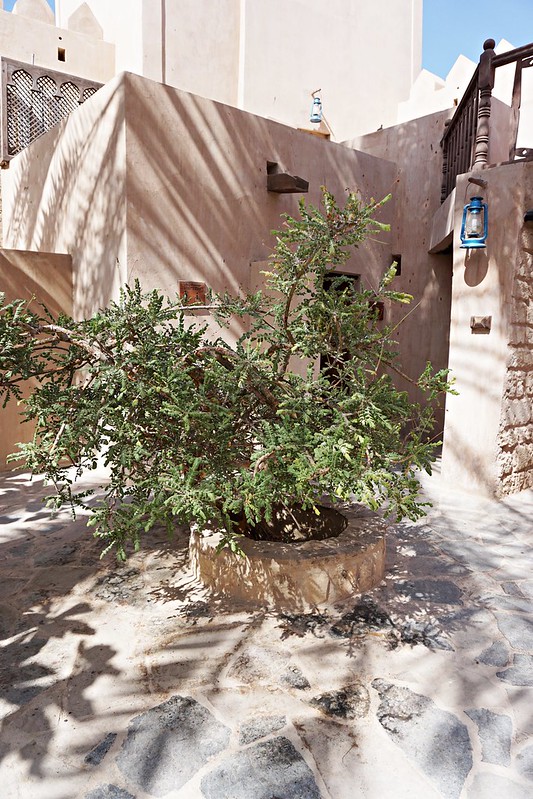 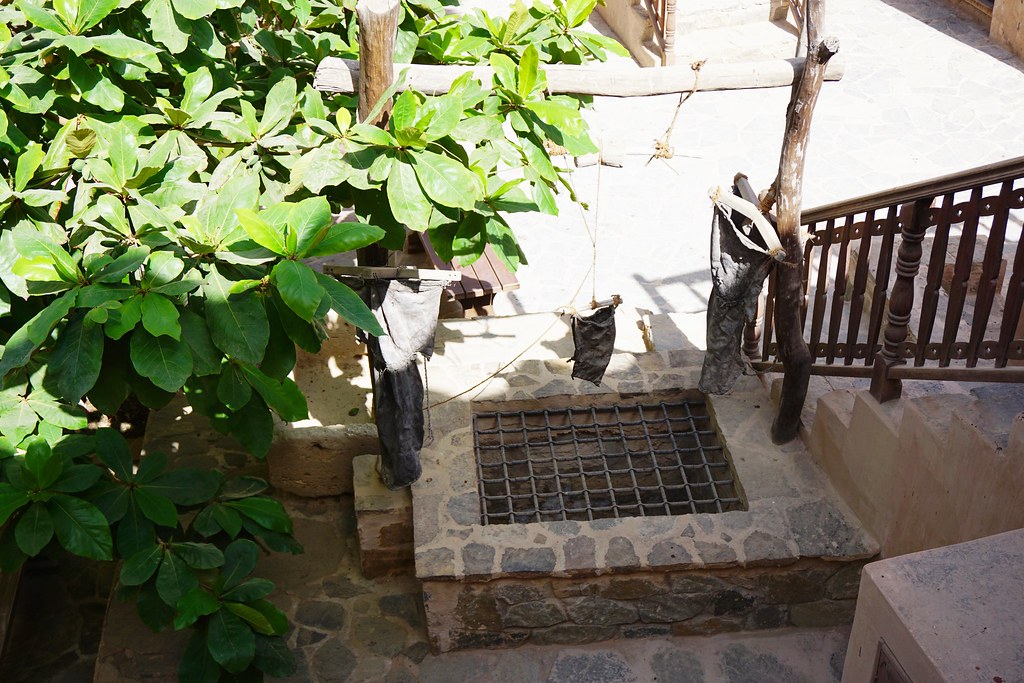 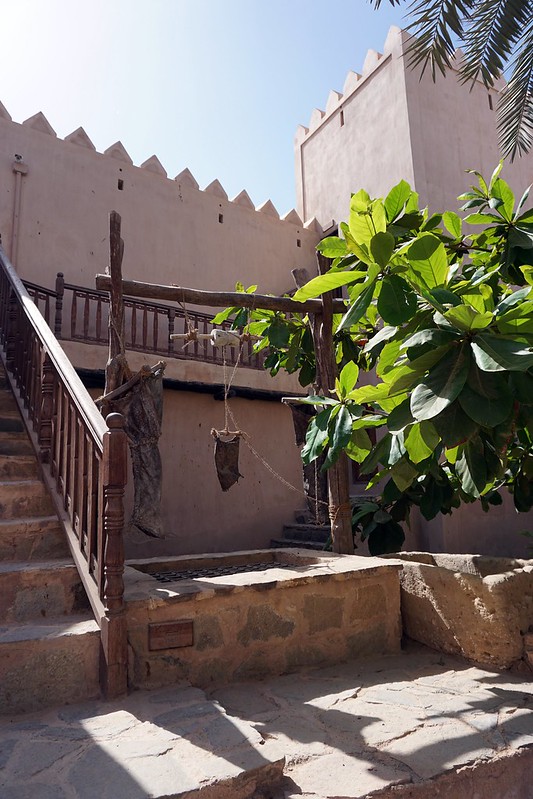 A well (tawi), in the courtyard of the castle, ensured abundant supply of fresh water and the well-ventilated outdoor oven (tannur) served as a place for roasting meat, fish and the daily baking of bread.

The upper floor of the building appeared to include a hall to receive guests, bedrooms, guest chambers, and access to the tower. Although there were kitchen-related things downstairs, the kitchen itself appeared to be upstairs. 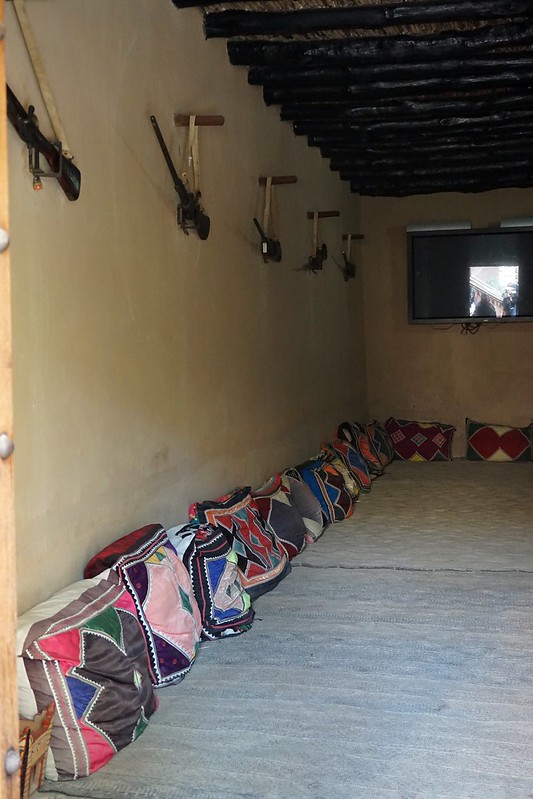 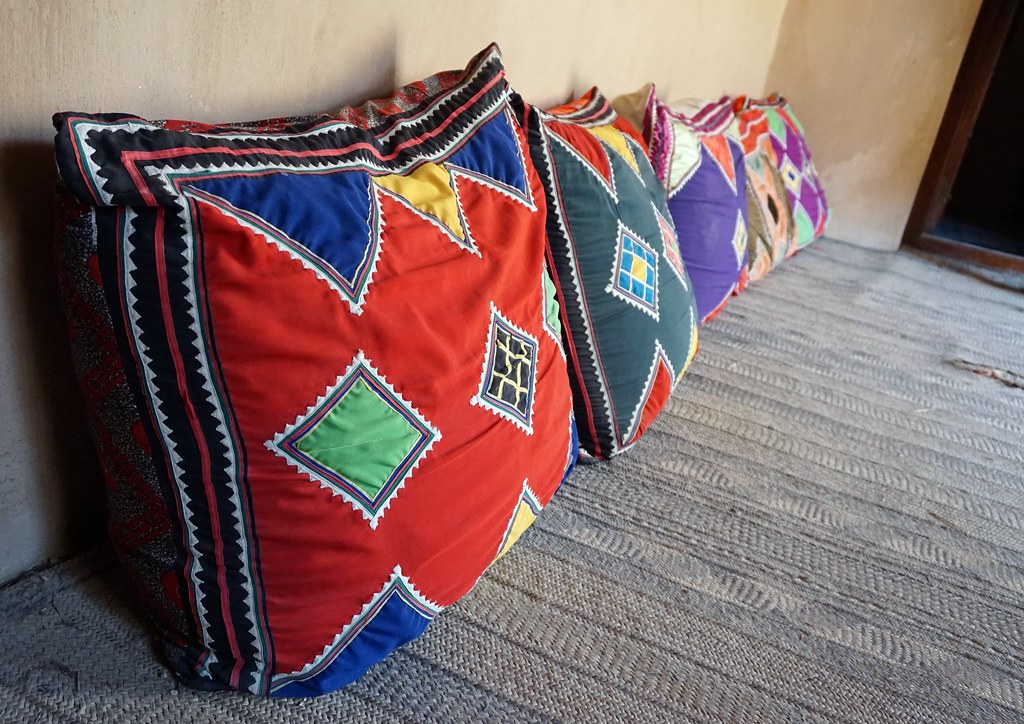 Love the vibrant colors of the cushions! It was and still is quite common for folks to sit on the floor to relax, have their meals, or enjoy tea or coffee.

Private residences reflect the culture’s concern for gendered space. Most Omani homes have formal rooms for men and their visitors, while women generally socialize in each other’s private quarters. When people meet to mark various rites of passage, such as births, marriages, and deaths, the celebrations are marked by clear gendered space. It is women who visit other women on the occasion of a birth in a family. Marriage rituals entail elaborate celebrations for women only, for men only, and, when space is open, with segregated sitting areas. Deaths are similarly marked by gendered use of space, with only men attending the actual burial of a body. (source) 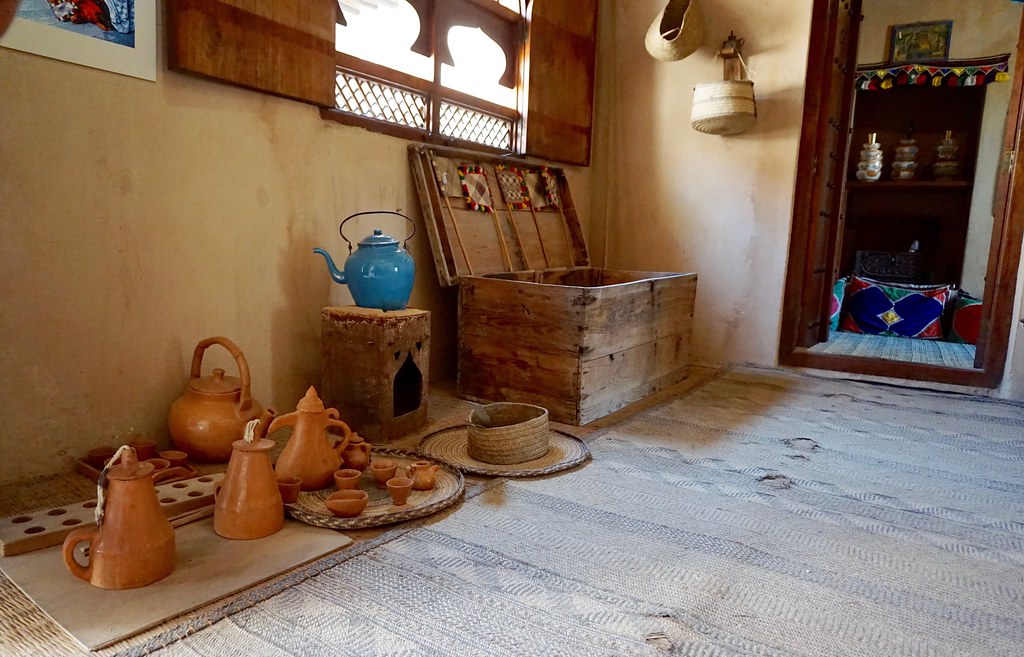 This is both the kitchen and the sitting room where the wali and his family sat to discuss news and domestic matters. Women had significant authority within the family unit and made strong contributions toward family decisions regarding various rites of passage. Outside the kin group, however, women used to have little authority or privilege. This has now changed, of course. Omani women are now educated and work outside home. 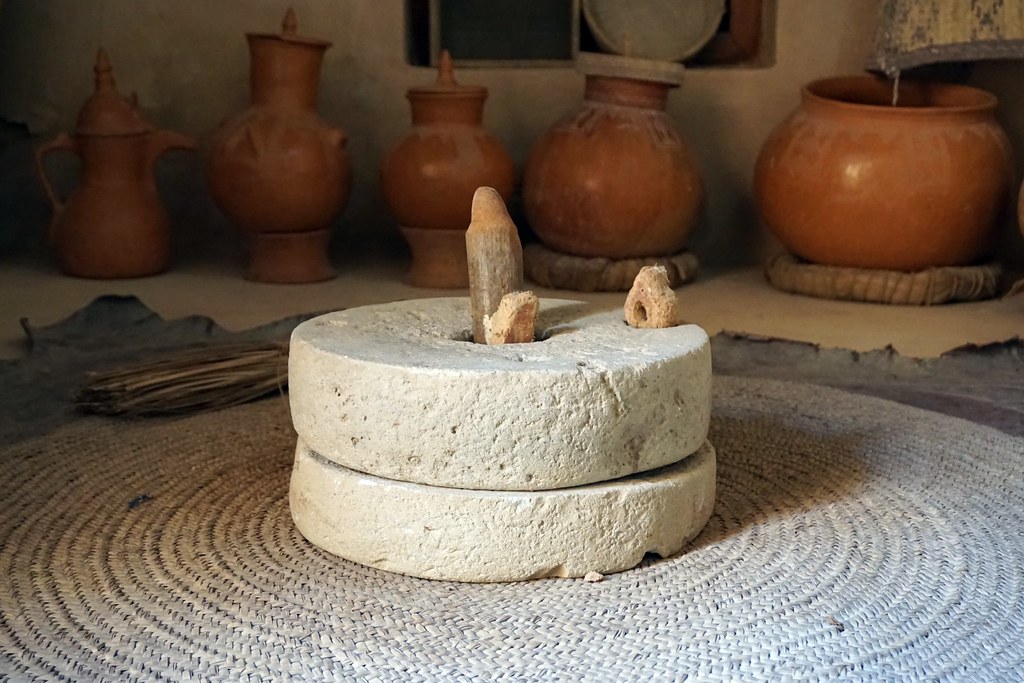 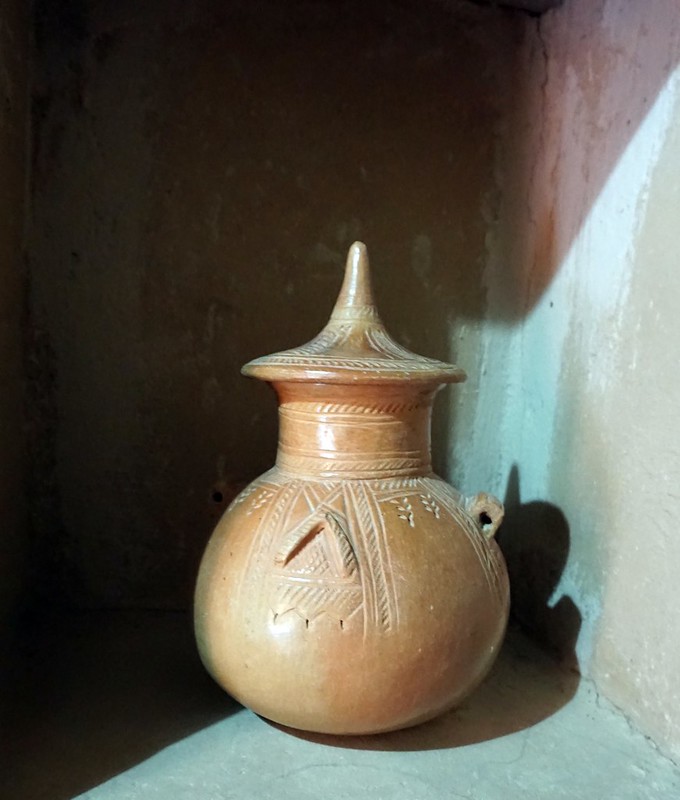 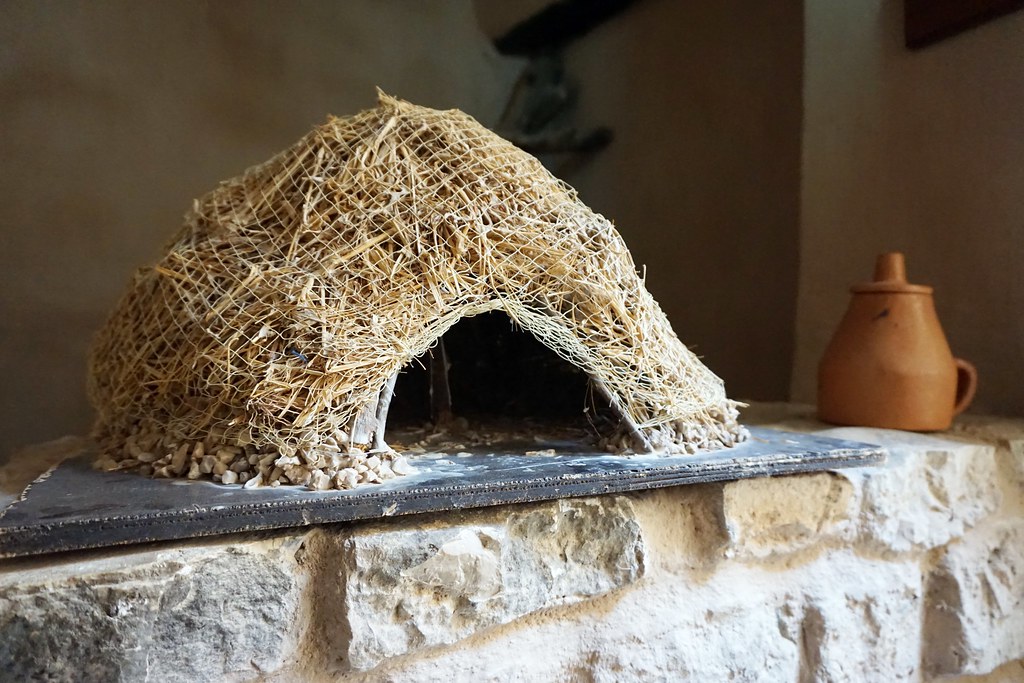 Omani cuisine revolves around rice. The morning meal is not significant, often consisting of bread or leftovers from the day before, and tea. The main meal of the day is in early to mid-afternoon. It is generally a large dish of rice with a thin sauce often based on tomato or tomato paste and meat or fish. The evening meal is generally very light, sometimes consisting only of fruit or bread and tea. The influence of Indian cooking is very strong. (source) 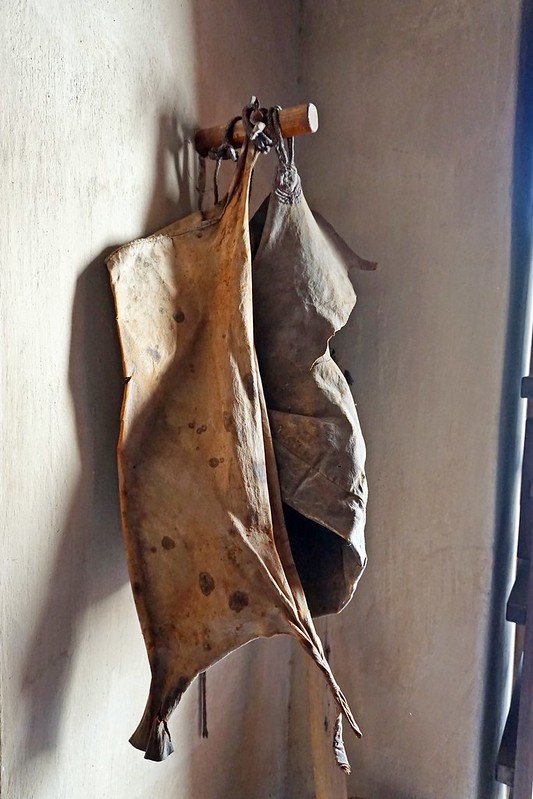 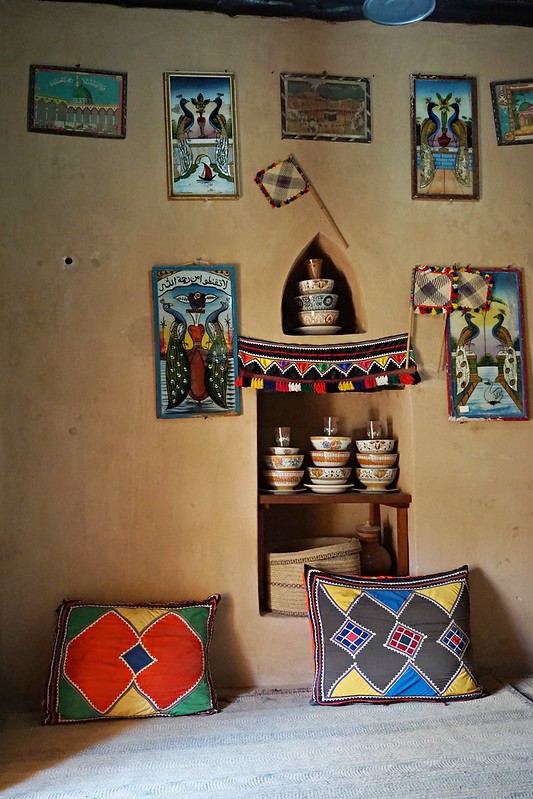 The town of Taqah is renowned for its artistry and locally made terracotta potteries. It also has a good collection of porcelain plates and bowls obtained through trade with China, India, Europe and Zanzibar. 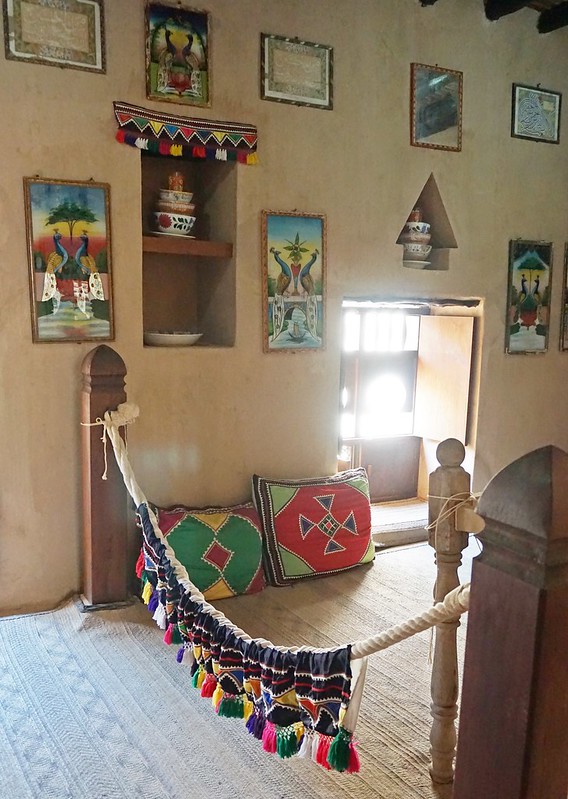 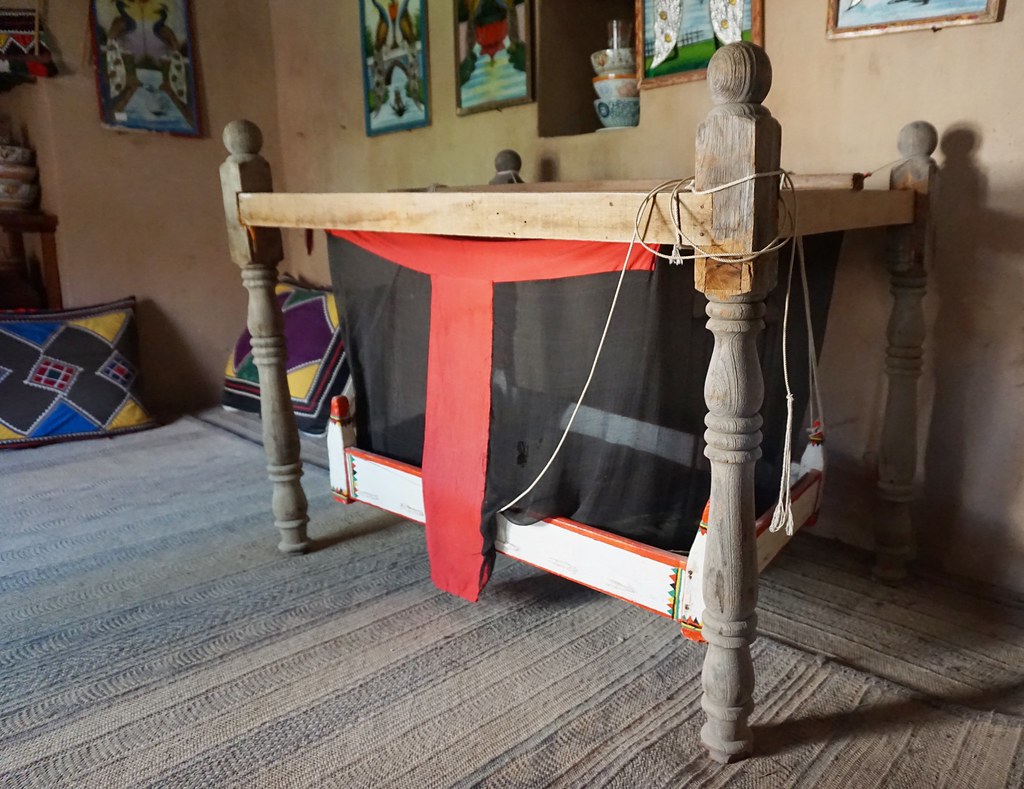 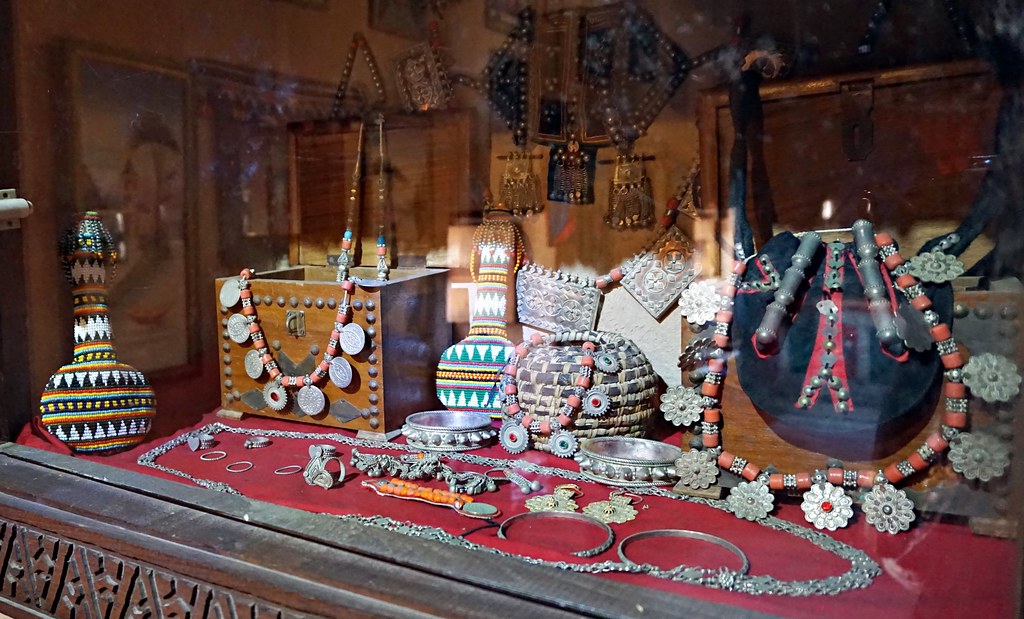 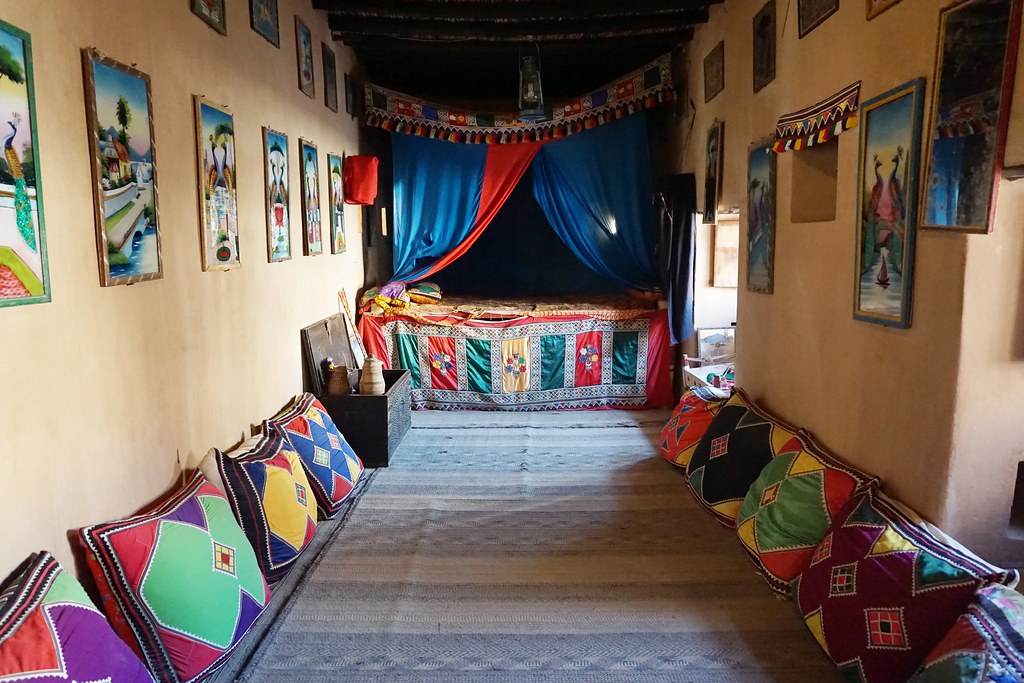 Obviously, he gets the biggest and most colorfully adored room. I also noticed that only this room had a bed. Through the bedroom windows, the Wali can easily see the courtyard below and the tower. 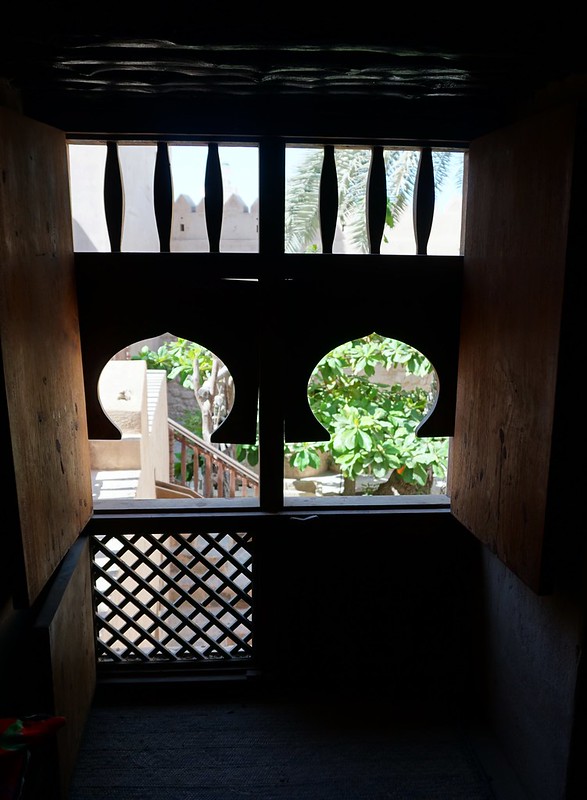 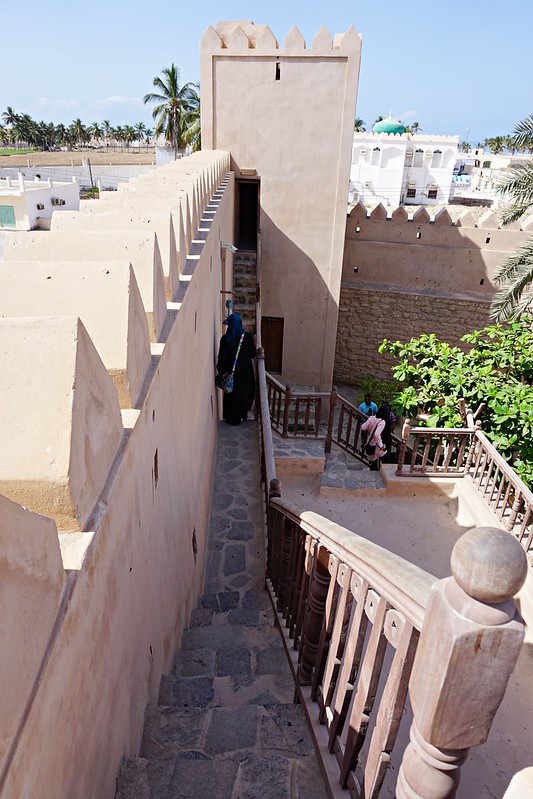 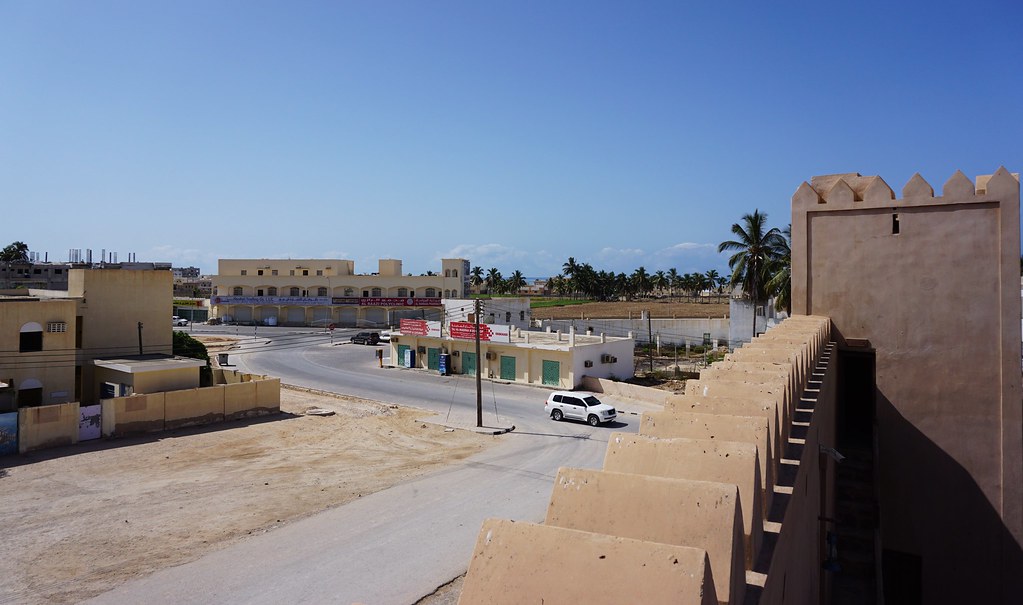 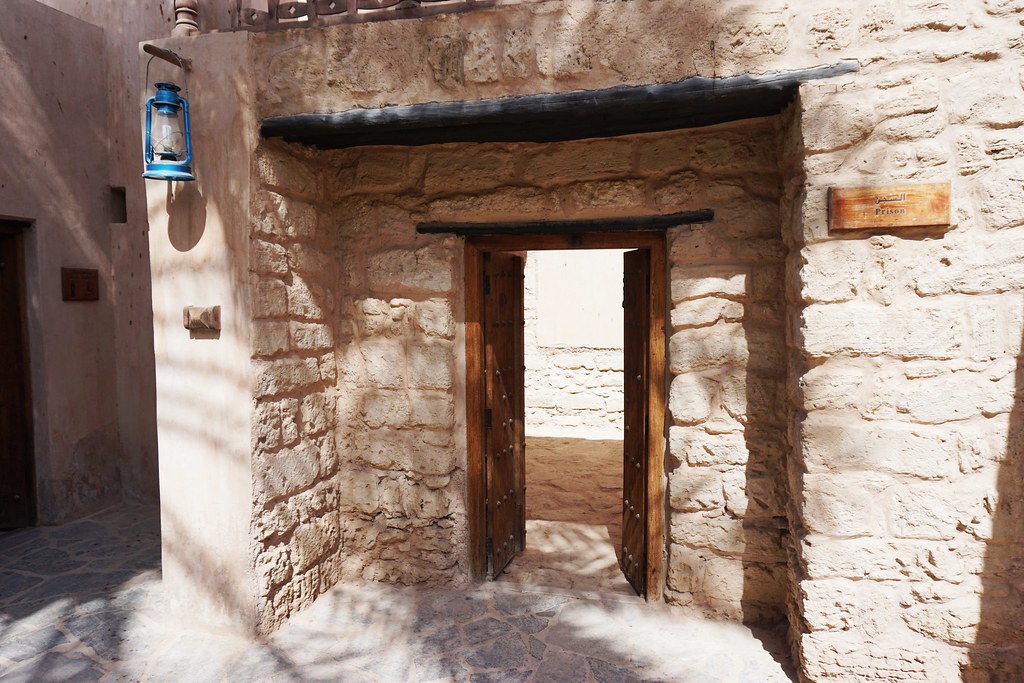 Just adjacent to the courtyard stood a small roofless jail where prisoners were kept under the watchful eye of the wali’s soldiers. 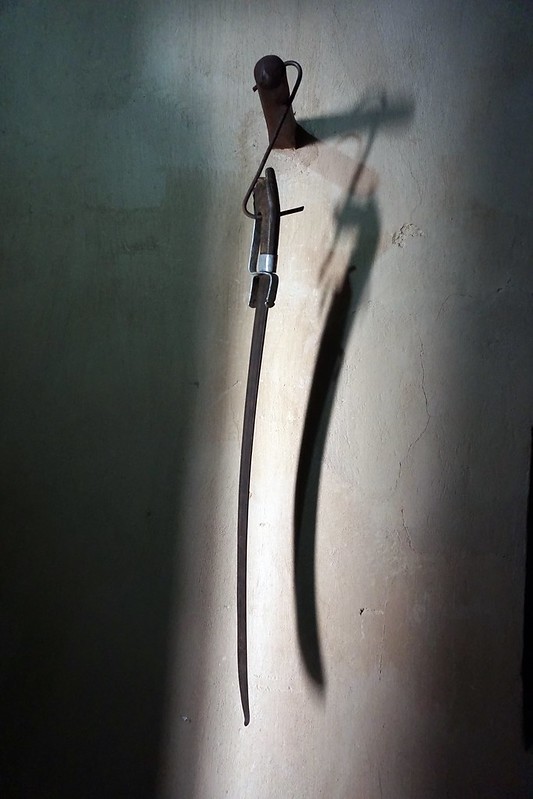 There was a good number of weapons on display, however we got distracted by the bats. As in live, breathing and flying bats! So many of them!

The room that served as a storage unit for weapons is the darkest of all rooms. There is only one door, and there are no windows. We walked inside the room for a closer look, took out my camera, and had only taken two photos when my sister noticed the bats hanging upside down from the roof, and panicked. The bats, quite clearly agitated to be disturbed from their peaceful slumber—after all, 10 am is midnight for them—began blindly flying about in the room. We—my sister and I, that is, and not the bats—dashed out madly from the room. And that was the end of our tour of the Weapons Room. 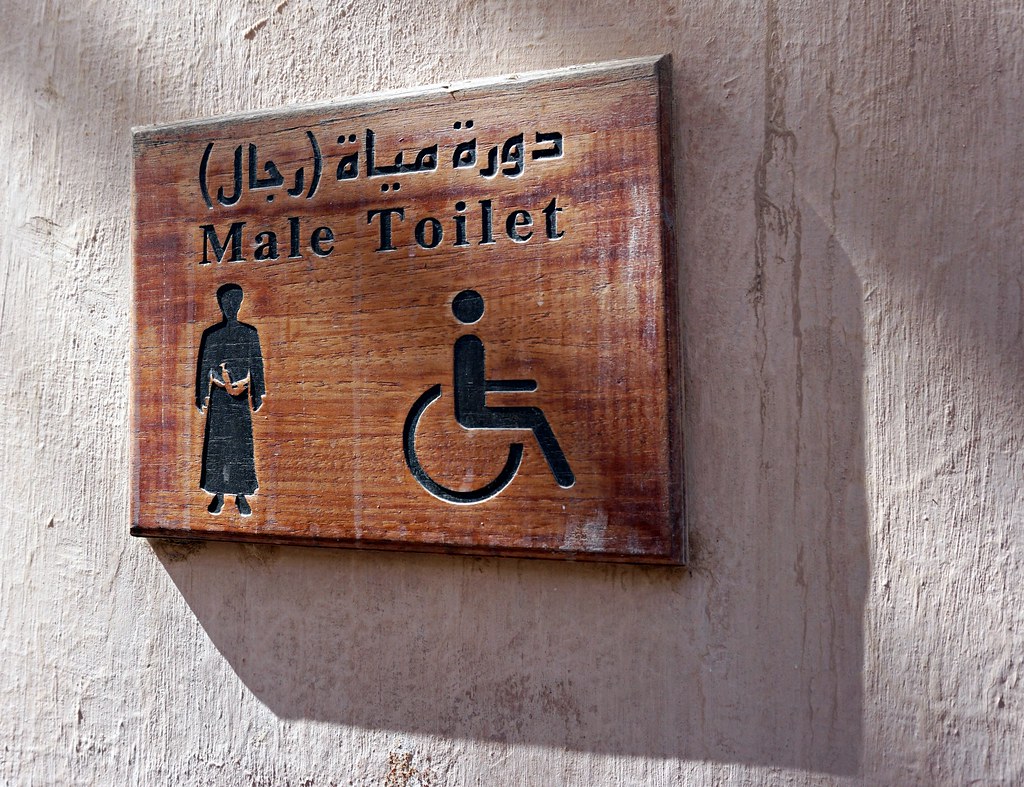