The prospect of being stuck in traffic or waiting by the open beach in the cold did not deter most of the residents and visitors of Dubai. We were all excited to see the fireworks that would break the Guinness World Record. I mean, how often do you get to see a world record being broken live?

My family and I viewed the spectacle from our fifteenth floor apartment (which, technically is the 20th floor if you count the parking levels as well). We sat in the balcony, wrapped in warm shawls, sipping delicious hot tea made by Sophia. We could hear the people downstairs having a party. When the clock was about to struck 12, they began their countdown – 5…4…3…2…1…nothing. No fireworks. We laughed.

They tried the countdown again – still no fireworks at the Palm, although we could see fireworks behind the Marina buildings. On their third attempt at the countdown, Burj al Arab began its fireworks; the Palm remained dark and quiet. We began assuming there might have been some technical issues. Turned out that they didn’t get the clearance (security reasons) to start well until 12:20 am. The traffic has finally cleared, but since it’s a few minutes past midnight, some people decided to stop and watch from the bridge. 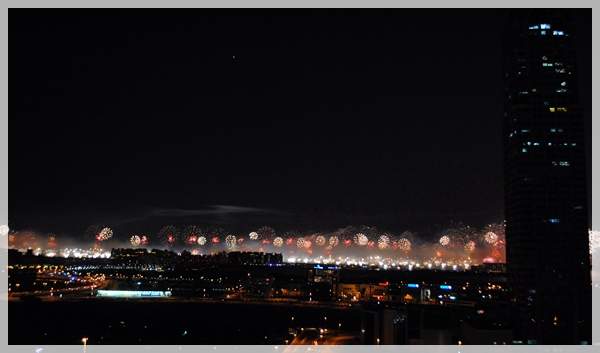 That was when the fireworks finally began. I was able to take only one picture, during the first few seconds when it all started, because I was too mesmerized by the beauty of it that I didn’t want to waste a second more behind the lens.

“Dubai saw 2014 in unforgettable style last night, with a successful attempt at the world record for the largest ever fireworks display.

Ten months in planning, over 500,000 fireworks were used during the display which lasted around six minutes, with Guinness World Records adjudicators on hand to confirm that a new record had been set.

Covering a distance of over 94km (61.6 miles) of the city’s seafront, the display incorporated some of Dubai’s top landmarks, including Palm Jumeirah, World Islands, the Burj Khalifa and Burj Al Arab.

The spectacle’s final salvo of fireworks created an artificial “sunrise” along the seafront, with the highest fireworks reaching more than one kilometre in height.” (Source: Guinness World Record)

I’ve seen several pictures and watched Youtube videos of the fireworks the next morning, but really, none of them come close to the amazing sight of watching it live. It was truly breathtaking!

I have also been expecting all the negative feedback from other people (majority of them either do not even live here or have never even step foot in this city). Whenever the city goes and does something grand and extravagant, these people immediately turn into human rights activists and environmentalists, reminding the city of modern slavery, the poverty in several countries, and world hunger. Oh, and the fact that Abu Dhabi bailed Dubai out of debt during the recession. Yep, nobody forgets that.

Remember, Dubai runs completely on trade and tourism. And while I do not agree with some of its strategies, like allowing night clubs and alcohol in an Islamic city or the salary discrimination based on a person’s nationality, both the public and private sectors are working tirelessly to make the city as appealing to foreign investors and tourists as possible. The UAE is a very small country (you can travel from one corner to the other in one day) that is working hard to make a name in the world.

And you guys, Dubai (and the UAE as a whole) is extremely generous in terms of providing financial and medical help to countries that need it. I did not know the extent of it until I made an Emirati friend whose husband works with the armed forces. This army officer regularly gets deployed to provide medical assistance to war-torn places. Several of these charity work and financial aid are kept low profile and not broadcasted in the media. I had a long chat with my friend, and since then, I have this renewed sense of respect for this country and its people.

So when a city, as young as Dubai, decides to spend some of its own money on fireworks as a marketing tool to grab the world’s attention and boost tourism, we should sit back and enjoy the spectacle.